TTAC Throwback: Why You Should Buy This 1984 Toyota Cressida Wagon 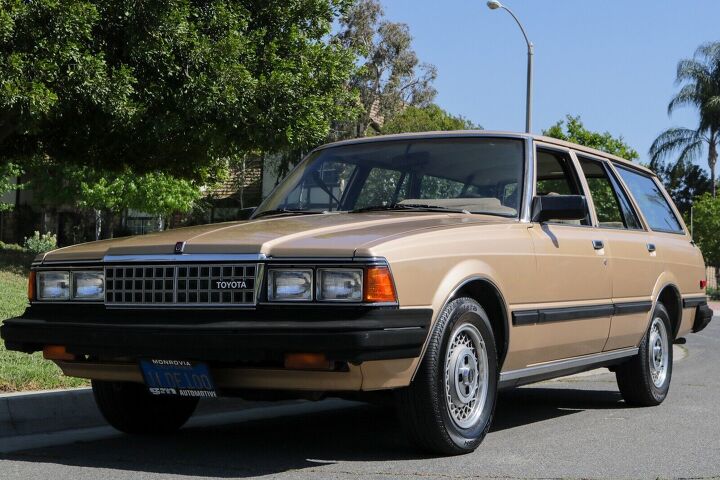 Before Lexus, there was Cressida. It was probably more of a Japanese take on a Buick- or Oldsmobile-style upper-middle-luxury car than the game changer Lexus would be, but that’s no mark against it. The first Toyota bearing the Cressida name became available in the U.S. in 1977, and they were decidedly trans-Pacific cars, bearing much resemblance to contemporary Detroit products. Interiors could be Brougham plush; some available upholstery fabrics wouldn’t look out of place in a bordello – or a Buick. However, the instrumentation was more complete than you’d find on most Detroiters.

Toyota sales literature of the time was dripping in upmarket advertising tropes like photos posing sedans in front of a posh hotel or a wagon with the tailgate open to receive some fine piece of antique furniture. Wagons usually wore woodgrain appliques, which no doubt reinforced the car’s upper-crust credentials in the eyes of potential buyers. Other markets had the option of a fetching little two-door hardtop model, which never made it to the U.S.

Cressidas were conservatively engineered, featuring unitary body construction, a MacPherson strut front suspension, and a live-axle rear suspension. They shared a lot of oily bits with their sporty Supra stablemate, including a SOHC inline-six-cylinder engine and suspension components.

Toyota refreshed the Cressida on a four-year cycle, and the confidently styled 1982 model hit showrooms in 1981, in sedan or long-roof flavor in the U.S. Its front aspect was restrained, sporting quad rectangular headlights and a demure grille. Well-proportioned wheel arches relieved the rectilinear side profile; a descending accent line is the only touch of eccentricity in this utterly sober design; it also harkened back to the preceding Cressida. Slender pillars and an upright windshield with a bright surround completed the dignified package.

Roughly the size of a Ford Fairmont, the 1982 Cressida was short of one luxury space; the EPA classified the sedan as a subcompact based on interior volume. Still, everything was well laid out and well made. Upholstery ranged from sensible velours to Iacocca-esque, button-tufted leather; it was “glove-soft,” according to the brochure.

As the crown of the Toyota lineup (pun very much intended), the 1982 Cressida benefited from the best the company could offer – including the jewel-like 5M-GE engine. That 2.8-liter inline-six spins sweetly from idle to redline and delivers its horsepower with utmost civility. A wide-angle aluminum cylinder head with belt-driven twin camshafts and hemispherical combustion chambers meant good volumetric efficiency. Electronic fuel injection meant precise fuel metering and helped with meeting emissions requirements. Sedans now had a fully-independent suspension too, but wagons continued to make do with a live rear axle.

The Cressida would go through another two generations before finally bowing out of the U.S. market in 1992.

It’s said that gentlemen drive cars with cylinders in multiples of six. That old chestnut usually applies to British machines with angelic ladies perched on their radiators, not mass-produced 1980s iron. But, the Cressida has an inline-six, and by all accounts, it’s a gem.

Offered by the original owner, this wagon appears to be the proverbial garage-kept survivor that has benefitted from a life of ease in salt-free California. It’s low mileage, too, showing just over 70,000 on the clock. The seller claims to have had it serviced regularly; even the AC is said to work.

The Not So Good:

Well, it’s not cheap, even when judged by today’s standards, and it looks as though there may be some discoloration of the front door panels, though it could simply be the way the nap of the velour is laying.

Things To Watch Out For When Buying a Toyota Cressida.

First, find one that doesn’t have tinworm, then sniff the transmission fluid (on automatics), ensuring it doesn’t have the whiff of death (a rotten, burned smell) and that it shifts smoothly. Sedans could be had with a manual, which should shift easily, be relatively quiet, and not pop out of gear.

Engines are very durable, so long as timing belts get changed every 60,000 miles or so and the coolant gets flushed regularly.

Yes, we all know Toyotas are as reliable as gravity (most of the time), but even a Cressida isn’t immune to deteriorating suspension bushings, belts, and hoses. Jack up the front end and check the suspension for undue play. Do the same for the rear if it’s a sedan equipped with IRS.

Cressidas and their kin were common enough that service parts like timing belts, distributors, shocks, struts, and the like can be had from sources like RockAuto or your preferred local parts house. Trim pieces and body panels will probably be the biggest challenge, so try to find as intact a car as possible.

To Sum It Up

It wasn’t that long ago I would have cackled at the suggestion of a beige Toyota Cressida with a starting bid of $9,999, but here we are. A GM B-body wagon that shows as nicely as this car would be priced similarly, so why not, unless a 5,000 lb tow capacity and the ability to swallow a 4 x 8 sheet of plywood are must-haves on your classic car checklist? Besides, a twin-cam, inline-six powered, rear-wheel-drive wagon is cool in my book. Buy this one and take care of it like a Picasso; they aren’t making any more.

TTAC Throwback is a series devoted to cars we think deserve to be owned by someone who really loves them. Just imagine Sarah McLachlan crooning In the Arms of an Angel as the camera pans past a deserving car up for adoption, hoping desperately that it doesn’t get recycled into a Nissan Versa (I’ve, I’ve got something in my eye). Now go ahead, put in your bid; there now, don’t you feel better? You’re doing the right thing!