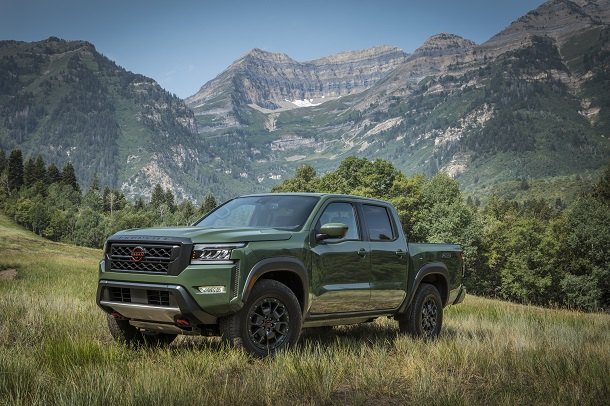 Prices include $1,150 destination charge in the United States and $2,050 for freight, PDI, and A/C tax in Canada and, because of cross-border equipment differences, can’t be directly compared.

But staying up to date isn’t always enough. Did the Frontier suddenly become a much stronger competitor?

Working its favor is that most of the rest of the segment is also a bit long in the tooth, though some fresh blood is coming for 2023. But the old Frontier was, well, old that Nissan would have to take some strong leaps forward to really be in the mix.

Speaking of a mix – that’s how the verdict is. Mixed.

Before we get too deep into this, let’s pause to remember that the frame isn’t exactly new – a lot of the bits and pieces we can’t see carryover. That includes the 310 horsepower, 3.8-liter V6. That said, the truck wears new duds, inside and out, and that’s a good thing.

It’s a more handsome truck than before – though the old design wasn’t so much ugly as it was dated. It looked like a relic from the Aughts. This Frontier’s reskin is handsome in a macho way – befitting of a truck.

The cabin is also much, much nicer, with a clean design that integrates the infotainment screen. Buttons and knobs aren’t sacrificed here, thankfully. There are flaws – Nissan’s infotainment system feels a tad dated, and despite the addition of sorely-needed soft-touch surfaces, some materials feel a little downmarket – but it’s a much more modern place to do business than before. You feel like you’re in the correct year, at least.

I will note that my test unit was a pre-production model, so that needs to be taken into account when talking about fit and finish.

On road, the V6 is smooth and torquey but the Frontier feels a tad heavy in terms of acceleration. The steering is also heavy, too – unusually so. But the ride quality leaned toward smooth, even in the PRO-4X off-road trim. It drives like a truck, yes, but that will be a good thing for many buyers. If you’re in search of a more car-like experience, Honda’s Ridgeline beckons. For a better balance between the two worlds, try Ford’s Ranger. But if you’re interested in brawny, truck-like manners without a major ride-quality sacrifice, the Frontier delivers.

Add $155 for floor mats and the $1,150 destination fee and you have a $44,315 truck that’s vastly improved over the previous generation. But is it good enough?

At the very least, it’s good enough to compete. It’s better, especially in the cabin, than the ancient Chevrolet Colorado and GMC Canyon, though newer versions of both are on the way. The cabin is on par with, if not better than, the Toyota Tacoma’s. The overall drive experience, however, leaves something to be desired when compared with the Ford Ranger or Honda Ridgeline. The Frontier PRO-4X does mix ruggedness with gentility better than the utilitarian Jeep Gladiator, but then, so do the other trucks.

The good news for Nissan is that the Frontier is back in the mix. The bad news is that it misses an opportunity to take the lead.

While it carries over a fair bit of under-the-metal mechanical bits, the 2022 Nissan Frontier has a redesigned exterior and interior.

Nissan fans, truck buyers who are looking for something a bit different yet still competitive.