The Grand Tour’s “A Scandi Flick” Crashes, Bangs, and Contrives to Fill Its Length 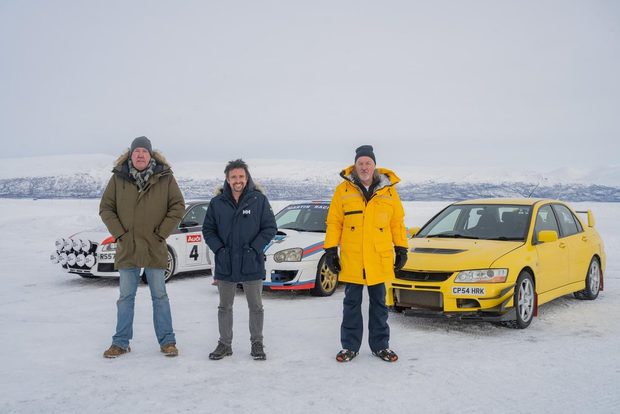 It’s been nearly three years since The Grand Tour switched its format away from the elaborate traveling tent and to its all-special format. On Friday, Amazon released the fifth such special, and the first “post pandemic” episode (their term, not mine). In “A Scandi Flick,” the familiar trio heads across Scandinavia in three rally-inspired all-wheel drive sedans. It’s certainly not the show’s worst work, but it’s far from the best. You’ll need to suspend disbelief and leave your thinking skills in another room.

(Warning: Big spoilers are ahead, so if you want to avoid them then stop here.)

The new special is the longest in the show’s revised format portfolio, as the first three episodes “Seamen,” “ A Massive Hunt,” and ” Lochdown” all spanned an hour and 30 minutes, while “ Carnage A Trois” was an hour and eight minutes. The premise is an interesting one this time, and avoids the corny “What’s with this and that?” prompt of both “Lochdown” and “Carnage A Trois.” Clarkson explains that for this episode the team wants to explore the world of the 2000s rally-inspired four-door.

An interesting topic for sure, but there’s an immediate flaw in the prompt when the presenters pull their cars around for a first look. Hammond selects the most obvious car in the class, a 2003 Subaru Impreza WRX STi, while May goes for the second car any enthusiast would think of, a 2004 Mitsubishi Lancer Evo VIII. For his choice, Clarkson goes with a 2007 Audi RS4.

Immediately, Clarkson is lambasted for his RS4 choice because “it’s not a Quattro.” Hammond and May are referring to the B2 Audi Quattro that went rallying in the Eighties, and its accompanying road-going version. Clarkson defends his selection saying that Audi has a long rallying history, which it does.

But as the question is limited to four-doors, the Quattro (out of production since 1991) was off-limits anyway. It was a two-door hatchback, and that latter characteristic was shared by almost all rally cars in the 90s and 2000s. Four-doors were the rare exception, and Subaru and Mitsubishi made the only spicy road-going versions a consumer could purchase.

One thing to note about this particular episode (unlike “A Massive Hunt”), is how the trio is intent on enjoying themselves throughout. The unscripted moments in shops and on the road bring back a feeling of the old Top Gear episodes. And that’s been lacking in much of The Grand Tour back catalog.

The three of them are assigned to explore which of their cars is the best by traveling 600 miles across Norway, Sweden, and Finland and completing challenges. It’s a classic Top Gear prompt for sure. The team is assured by various news outlets they’ll be in the wilderness for most of their journey. A map is shown with the route but does not include cities or points of interest, only national borders. Start suspending belief here.

The snowy Scandinavian landscape reveals itself immediately and stays put through the entire show. As usual for The Grand Tour it’s all excellently filmed, and accompanied by appropriately subtle background music. The show does nature shots and sweeping views of roads so perfectly.

Accompanying the team is the expected Terrible Backup Car, a Volvo 345 in this instance. It’s communist-looking and from the Eighties, and doesn’t really fit the program, apart from its Swedish origin. It’s first noticed early on when they visit a shop to buy some cold-weather car supplies for the wilderness. Eventually, it vanishes but that doesn’t matter.

Almost immediately the first challenge takes place, in a submarine base located within a mountain. There’s a straight stretch of tunnel that presents an opportunity for a speed and bravery test, which can’t happen outdoors because of the weather. Clarkson goes first, and in a moment James May probably regrets, he goes next.

His Evo loses traction upon braking at the end of the tunnel, and the yellow car fishtails and slams driver’s side into the concrete wall at considerable speed. Viewers are presented with the footage as it happens, and see James hit his head against the window and B-pillar of the Mitsubishi as he crashes. EMS are present immediately, and various crew look on as a bloodied and shaken James gets out of his wrecked Evo.

May is absent from the episode for a while as he’s in the hospital, and has a broken rib. He sticks around in Norway as the other two cross into Sweden to continue the journey. It’s around this moment, 28 minutes in, that the episode starts its decline.

Hammond and Clarkson find a shop “in the wilderness” where they can modify their cars and get them more rally-ish. Clarkson applies an excellent Audi Sport livery to his RS4, and Hammond goes for a classic Martini racing livery on the WRX. Clarkson also adds a special feature to his exhaust, a flamethrower.

A theoretical flamethrower, that is. In an unusual turn for the show, CGI flames are presented instead of real fire. Perhaps laws or lawyers prevented the real thing, but when Clarkson presses the Flame On button some unconvincing CGI does the rest. The two do some rally driving on a frozen lake that’s been plowed into a race track, which they just happen to find on their drive. The driving is entertaining, at least.

May hires a shop to repair the extensive damage done to the Evo, which allows him to join the other two at the frozen lake at about the 40 minute mark. The Evo is clearly worse for wear, but still in functioning condition. Skiers turn up at the lake, and then a race ensues as the sedans tow their human skier cargo around as fast as possible. It’s all very choreographed as it would be too dangerous to do it for real.

Driving through more “wilderness,” the team ends up spending the night in a wood survival hut they find that’s filled with meat. Turns out they fail to notice they’re at a museum property, and wake up in the morning surrounded by tour groups. Hammond has covered Clarkson’s Audi completely with ice, and Clarkson dumps gasoline on the Audi’s hood to help get the door open (?). It’s time for more fire, which also looks like CGI.

At an hour into the episode it’s out of steam and out of material, but keeps on going. At a restaurant the trio see a house being moved across a town. This prompts them to put their own accommodation on skis, because they’re about to be “in the wilderness.” The reason there’s no information shown when a map is presented becomes obvious, because the team has been in or near populated areas at almost all times during the journey.

A couple of minutes elapse and the trio has their selected homes on skis, which they proceed to drive around and crash into snow banks, dumpsters, “important signs,” and similar. The team reiterates they don’t know where they’re going at different points, and drives into the evening. A serious storm happens so they call it a night, and park where they are.

This is of course at a ski resort, at the top of a ski slope. Antics ensue, and they take turns heading down the ski slope. Clarkson decides to push a sleeping Hammond down the slope in his portable house in a moment of attempted murder. Fortunately, the house is miraculously stable and Hammond incurs no injury when he slams into the barrier at the base of the slope.

We’re still watching a car show as Clarkson takes the RS4 down the slope with his house attached. He accidentally presses the CGI fire button, which lights his wooden house on fire for real. May leaves his trailer at the top of the hill because he can’t figure out how to attach it to the Evo.

The final gag lasts for 15 minutes as the team drive across a handy plowed frozen lake so they can speed toward their final destination (an airport) in time. Suddenly they know exactly where they’re going. May drives his car into a soft patch of ice in the middle of the lake, and accidentally falls through. Hammond and Clarkson create a rudimentary winch device out of wood which miraculously works, but the Evo is theoretically ruined once again.

“A Scandi Flick” is about 45 minutes of content presented in an hour and 39. The team are enjoying themselves throughout, but lots of fluff and script should have been left on the editing floor along with the CGI. It’s certainly better than “Carnage A Trois” and “A Massive Hunt,” but pales against “Seamen” and the 2019 Mongolia special “Survival of the Fattest.” It’s only a fun watch if you don’t think about it too hard.