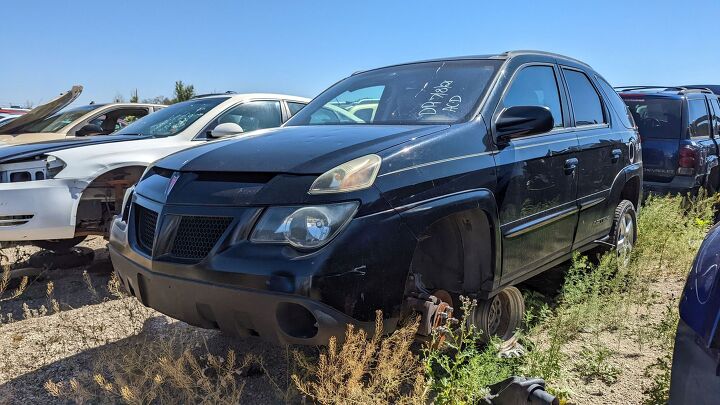 When the Pontiac Aztek concept SUV was unveiled in 1999, it was a bit odd-looking but no more so than the Isuzu VehiCROSS. It looked angular, low, and menacing, which is just how plenty of Americans wanted their truckish vehicles. When the production Aztek appeared as a 2001 model, however, some changes had been made.

The Aztek that showed up in Pontiac showrooms in late 2000 was a bulbous, overcladded monstrosity, full of weird slots and misplaced mutant nostrils. Aztek production ceased in 2006, and GM filed for bankruptcy several years later.

Despite its ugliness, though, the Aztek proved to be a very useful vehicle for people who like to do outdoorsy-type activities. It sold well in the Mountain West, and I found this ’04 in a self-service yard in Cheyenne, Wyoming.

The Aztek was based on a shortened U-Body minivan platform, making it first cousin to the Pontiac Montana. Its closest relative was the Buick Rendezvous, a (somewhat) de-uglified Aztek sibling that managed to stay in production through 2007.

One of the coolest features of the Aztek was a center console that doubled as a removable insulated cooler (as usual, the one in this Aztek is missing). I own an Aztek cooler (which I use when picnicking on my Honda CR-V folding table) and I was surprised to learn that it holds exactly five 12-ounce drink cans. I’ve been told by Michigan residents that this makes perfect sense for their state, because one always drinks one beer out of the six-pack between the liquor store and the car. Go, Detroit!

Speaking of Michigan, that’s where this Aztek was sold (though it was built in Ramos Airzpe, Mexico). There’s still a dealership at the site of Riverside Pontiac-Buick-GMC, but now it’s known as Young Buick GMC.

Only one engine/transmission combination was ever used in the Aztek: A 3.4-liter pushrod V6 bolted to a four-speed automatic.

The Aztek was supposedly laser-targeted at the Generation X demographic, the members of which would have been between 19 and 34 years in 1999. I’m a Generation Xer myself, and I recall being horrified by the production Aztek in 2000 (though at the time I had a fleet of one CRX, one Civic hatchback, and a 1965 Chevy Impala sedan that ran mid-13s in the quarter-mile, so perhaps my vehicular priorities differed somewhat from those of my generational peers).

This appears to be the entry-level AM/FM/CD sound system for the ’04 Aztek.

If you could tolerate the appearance of the Aztek, it was a fine camping machine.

I’m all about working hard, standing out, and playing large. I’d have to say that that’s not a sufficiently cynical Generation X slogan.

Sarah and Jake seem even more loathsome than their Aztek.

Sam and Kate become mango freaks in their Aztek. Then they scarf some sushi. That’s not the proper Generation X way to get sushi.