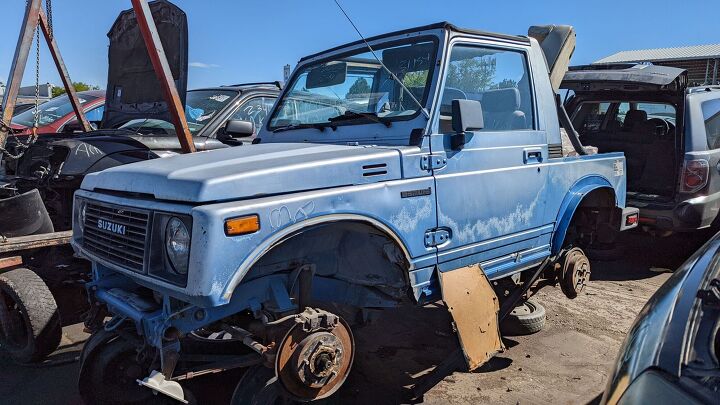 Because of all the rebadged Daewoos sold in North America via the Suzuki brand during the 2000s (as well as actual Suzukis), you’ll find no shortage of cars bearing the big S logo in most car graveyards these days. But what about the first highway-legal four-wheeled Suzuki sold on our shores, the Jimny?

The US-market Suzuki Jimny was known as the Samurai, and sales began here for the 1986 model year (and early in Canada, though with SJ-410 badging). Prior to that, the Suzuki Cultus had been available here for a year (as the Chevrolet Sprint), and of course, Suzuki motorcycles and— later on— ATVs were quite popular from the 1960s on. It appears that, unlike Yamaha, the Suzuki Musical Instrument Corporation never had a connection with the vehicle company that shared its name.

The Samurai turned out to be a very competent off-roader, in part because its narrow track enabled it to squeeze past obstacles that would halt a Wrangler or Scout. Unfortunately for Suzuki, Japanese highway driving conditions aren’t quite as punitive as what we deal with in North America, and the Samurai struggled with pedal-to-metal sustained speeds in extreme weather.

Consumer Reports reported in 1988 that the Samurai was rollover-prone and thus “not acceptable) during sudden-swerve testing, which led to a real Jarndyce-v-Jarndyce-style court battle with Suzuki that got settled in 2004.

Of course, a jouncy, high-center-of-gravity truck like this won’t handle like a regular car… but try explaining that to American drivers. Later Suzuki trucks sold here got warning labels on the subject, slapped on the driver’s doors.

In any case, the Samurai was available here all the way through 1995, but the rollover controversies took a bite out of sales after the late 1980s and these trucks are very rare today. This one appears to have been sold new at O’Meara Suzuki near Denver, which means it will be crushed within a few miles of where it was sold.

The interior is no-frills, as befits a vehicle sold as the Suzuki Farm Worker (in New Zealand).

This one once had a five-speed manual transmission, though it appears that some junkyard shopper bought it before I got here.

The engine is a carbureted 1.3-liter straight-four, rated at 63 horsepower. Imagine this poor little engine trying to haul several 250-pound occupants and their beer coolers across New Mexico at 90 mph. In August. Uphill.

Though it’s no sweat finding examples of the larger (Vitara-based) Suzuki Sidekick (and its Geo/ Chevrolet Tracker twins) in your local Ewe Pullet nowadays, the Samurai has a fanatically devoted following and most of these trucks get rescued before they can reach a place like this.

This is the first Samurai I’ve seen in a wrecking yard in at least 15 years. Maybe 20 years.

Farewell, little Jimny. In Japan, you can still buy a new Jimny that meets kei-car specs, right down to the 658cc engine.

In Japan, the Go-Gos took their Jimny on a painfully pink vacation. It’s strange to think that the Go-Gos were considered a punk band.

The next major turning point in the history of civilization!

The extremely 1980s occupants of this Samurai manage to avoid putting it on its roof during a track test.

The mock-macho narrator in this commercial is top-notch.

America’s most popular, most inexpensive convertible.

For links to more than 2,300 additional Junkyard Finds, please visit the Junkyard Home of the Murilee Martin Lifestyle Brand™.