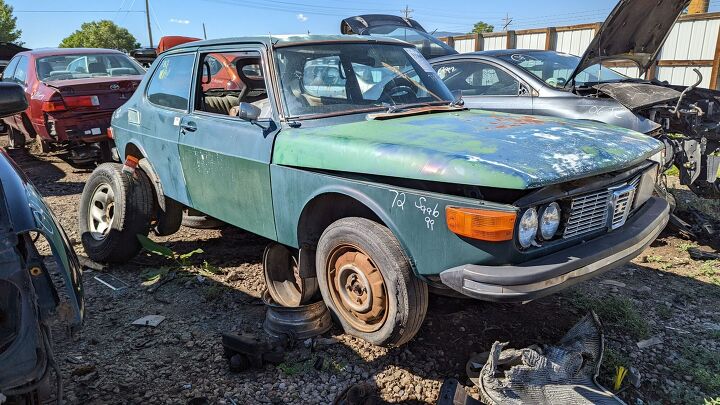 When the arms manufacturer known as Svenska Aeroplan Aktiebolaget built its first production automobile, the goofy-looking 1950 Saab 92, that company’s best-known product was the goofy-looking fighter jet known as the “Flying Barrel.” Both the aircraft and cars got the job done, but it wasn’t until the late 1960s that Saab built a jet that looked just as cool as the hippest Lockheeds and Mikoyan-Gureviches. At around the same time, Saab introduced its first car that wasn’t viewed by non-Scandinavians as an oddball machine for eccentrics: The 99. Here’s one of those cars, found in a self-service yard just south of Denver.

The 99 has been a tough vehicle for me to find during my junkyard travels; prior to today’s ’72, I’d only documented two discarded 99s. In fact, I’d found more Saab 96s in car graveyards up to that point (plus a single 92, though that was in a lichen-covered yard in northern Sweden). I don’t recall seeing many 99s on the street as a youngster, despite having spent my formative automotive years in the Swedish-car-crazed San Francisco Bay Area.

Saab had been reluctant to make the jump from two-stroke to four-stroke car engines, finally buying Ford Taunus V4s to put in new 96s starting in 1967. For the 99, Saab partnered with Triumph to develop an overhead-cam straight-four engine. Slanted over at 45 degrees from the vertical and with a Citroën-style transmission-in-front longitudinal engine mounting, this front-wheel-drive rig was weird enough to please the Trollhättanites while still delivering a good driving experience.

Triumph put this engine in the Dolomite and TR7, and used it as the basis for the troublesome Stag V8. Saab reworked it for greater reliability, finally producing a thorough redesign in 1981. The one in this car (if it’s the original unit) displaces 1,854 CCs and was rated at 97 horsepower.

This car is in rough, weatherbeaten condition, and it’s full of car parts plus random electronic junk.

I’m pretty sure that it was a parts car bought by a Denver-area Saab aficionado and used as outdoor storage for a decade or three.

I found a bunch of Bay Area newspapers from early 1989 inside. Bought in California 33 years ago, driven to Colorado, and parked forever? We’ll never know.

Thanks to the five-digit odometer, it’s impossible to say how many miles this car drove during its life. I’m guessing 122,135 miles looks about right.

Just about every Saab I find in a Colorado junkyard still has old-timey studded snow tires in the trunk. This car is no exception.

The sticker price on the 1972 Saab 99 two-door sedan was $3,395, or about $24,475 now. Americans had a surprising number of choices for small front-wheel-drive cars that year; shoppers who didn’t want the Saab 99 could choose from such not-so-mainstream offerings as the Fiat 128, Renault 16, Renault 12, Audi Fox, Austin America, Subaru 1400, various Lancias (for really eccentric types), Honda 600, and (of course) the Saab 96 and Sonett. The Honda Civic first appeared here as a 1973 model, followed the next year by the Datsun F-10, and little front-drivers became less suspect in the eyes of the squares after that.

I’m pretty sure headlight covers like this were illegal in 1972 America.

Rough 99s like this aren’t worth real money (even very clean original ones barely squeak into five-figure values), so it was unlikely that anyone would have fixed this one up and put it back on the road. I’ve been checking in on this car over the last month, and it appears that nobody has pulled any parts from it (the same thing happened with a 1976 Saab 99 I found in a nearby yard last fall; it went to The Crusher essentially intact).