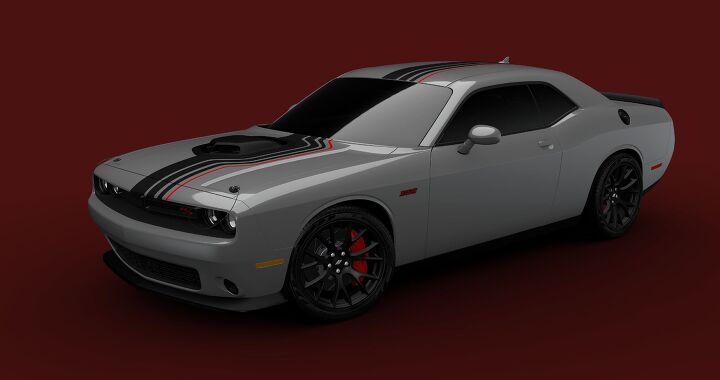 You may have heard that this is the last model year for the Charger and Challenger as we know them today. As a send-off, Dodge is creating a yaffle of special editions based on past packages or trims – along with allocating the entire year’s run at once. The latter is surely causing dealer principals to talk into their morning hit of cocaine caffeine.

This is the first of seven special editions, to be precise, cars that won’t be available for ordering but instead slipped into the system like Willy Wonka’s golden tickets. Unlike those tix, however, Dodge is committing to publicly listing the dealers which have earned allocation for these cars, a move which will surely send collectors scrambling.

The ‘23 Dodge Challenger Shakedown recreates the Dodge Shakedown Challenger concept which was shown at the 2016 SEMA Show in Vegas. It follows the original’s black-and-red interior and exterior appearance, though ditching some colorways in favor of either Destroyer Grey or Pitch Black. To be specific, 500 of the former will appears as R/T Scat Packs with the latter as 500 R/T Scat Pack Widebody trims. They’re all Shakers, too. Cue up the Barrett-Jackson auction patter in a few years.

All the Shakedown models, wide and otherwise, will come with the R/T Plus Group, Tech Package which includes satnav, carbon/suede interior materials, and a Dynamics Package. The latter shows up in the form of red six-piston Brembo-branded brakes which are of use in a car this heavy. Typical badging alterations are present including different grille jewelry and the Shakedown stripe which traces an outline of the aforementioned Shaker hood as the stripe wends its way over the car. No power increases were announced for the 392 cubic-inch V8.

Half a dozen special-edition Challenger and Charger models will be revealed through September 21, 2022. The seventh and final 2023 Dodge model is planned to be shown at the 2022 SEMA Show in early November. Allocation, when it is finalized later this autumn, will be posted on DodgeGarage.com