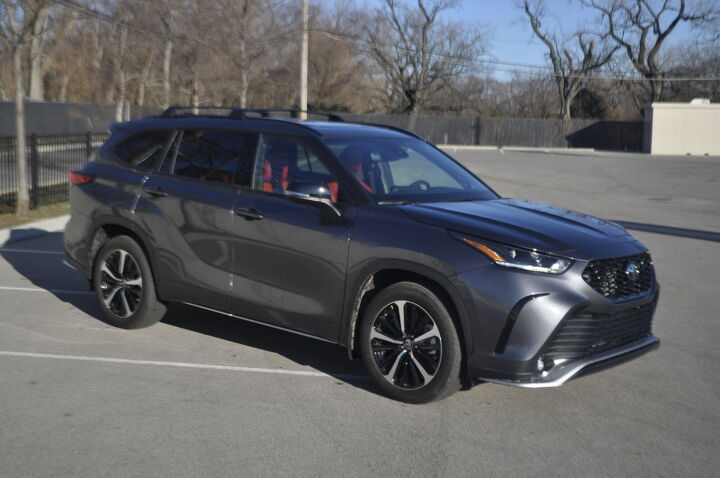 Prices include $1,215 destination charge in the United States and $1,190 for freight, PDI, and A/C tax in Canada and, because of cross-border equipment differences, can’t be directly compared.

Extremes are easy to write about.

Just as sportswriters would prefer to cover either contending teams or basement dwellers instead of those that win about as much as they lose, most auto writers find it easier to describe sexy sports cars or to lampoon rolling failures.

This is why writers who are itching to show you how well they can use a thesaurus are almost as happy to see a Mitsubishi Mirage arrive at their home as they would be a Ferrari. Almost.

With that in mind, maybe this is just preemptive excuse-making, but pardon me if I struggle to elevate my prose when it comes both to praise and criticism of the 2022 Toyota Highlander. Like so many of today’s utility vehicles, it does a lot well – enough to be better than the average lumbering crossover – while also being otherwise utterly unremarkable.

Indeed, one of its biggest flaws is also one of its biggest draws, depending on the buyer – the relative lack of personality. For some, it will induce naps. For others, the Highlander’s relative anonymity is a plus – some folks just want to move through the world without drawing undue attention to themselves.

It’s not that Toyota’s design folks didn’t try with the Highlander. It has some curves – it’s not just a slab-sided box on wheels. But the design is neither beautiful nor ugly enough to truly turn observer’s heads. Example: I am trying to picture a Highlander in my head as I write this, and the image is fuzzy, despite the vehicle’s ubiquity. It’s not as hard to conjure up a vision of Kia’s Telluride, Hyundai’s Palisade, or even Ford’s Explorer, even though two of those three have cleaner lines that lead to looks that are arguably blander than what the Toyota offers.

Maybe there’s some brand stereotyping at play here – Toyota is still trying to shake the image of beige it got slapped with ages ago. Nevertheless, the Highlander’s styling blends.

Toyota has set the XSE as a “sporty” trim, and the steering feel is meant to be along those lines. The springs have a higher rate and the XSE has a rear stabilizer bar. The shocks are retuned for lower friction compared to other trims. The all-wheel-drive system can send up to 50 percent of the torque to the rear wheels and also divide from left to right as needed.

With all this, the driving experience is pure contemporary Toyota, as well. The Highlander’s 3.5-liter V6 has guts enough for the city, but you feel its weight when you really press on the go pedal. It has handling that’s best described as “decent”, especially relative to the class/type of vehicle it is. That it is to say it’s not really “sporty”, but at least you feel some connection to the road. The steering has some heft to it, which is nice, and the ride, while erring on the side of firm most of the time, doesn’t jar you. The Highlander feels heavy but not ponderous.

The cabin is a mixed bag. Toyota is working hard to play catchup in the infotainment game, and while some models show improvement, the Highlander runs the UX that has become a bit too familiar. I credit Toyota for using knobs, and the HVAC controls are easy enough to use, but the infotainment screen is as awkward as two teens on a date. Little horizontal buttons on the screen’s side are meant to be helpful but their diminutive size makes them hard to press quickly.

XSE models do get unique interior appointments like carbon-fiber finishes and ambient lighting. A two-tone red and black setup is a no-cost option.

XSE is a mid-level trim and as such comes standard with features like Apple CarPlay, Android Auto, Amazon Alexa, five USB ports, and available premium audio.

XSE also has a bit of a unique appearance, relative to other Highlanders, with 20-inch wheels with black accents, unique front fascia, grille, and lower spoiler. The air intake is larger than on other trims, and the headlamps have black accents and light-strip DRLs. The rocker panels are also unique, and this trim gets dual-exhaust tips. There are black roof rails, mirror caps, and window moldings.

My test unit cost a base price of $43,950, with the as-tested price ringing over $47K thanks to the premium audio with navigation and a bunch of interior/exterior appearance features such as all-weather floor and cargo liners, mudguards, and a chrome rear-bumper protector.

I found fault with very little about the Highlander, except the infotainment UX and the interior design choice made regarding the infotainment screen itself. It does everything as well as you’d expect.

It’s not the segment’s best, and not the segment’s worst. At least it’s good enough to not fall in the muddled middle. It may not be extremely good or extremely bad, but, while it can be unremarkable, it’s at least above average. In sports parlance, it’s better than .500.

That’s not exactly a glowing recommendation, but the Highlander is more good than bad, especially if head-turning style doesn’t matter to you. The Highlander may be a bit anonymous, but it works well enough that you likely won’t care.