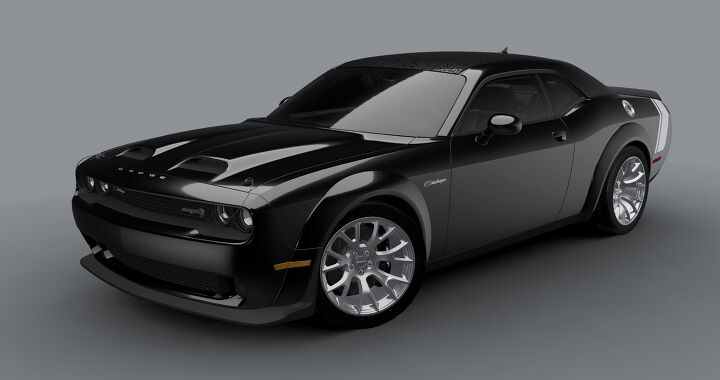 The sixth of seven Last Call editions crafted by the speed freaks at Dodge has been unveiled, showing up for duty as one which makes reference to a muscle car that haunted Woodward Avenue in the 1970s. And, yes, it even has a vinyl roof – kind of.

Witness the 2023 Dodge Challenger Black Ghost, a special edition offering a modern take on the original car that prowled Detroit nearly 50 years ago. That machine was a black 1970 Dodge Challenger RT SE owned by Godfrey Qualls and earned a legendary reputation for flexing its 426 HEMI-powered muscle on Woodward and then driving off mysteriously into the night, often not to be seen again for months. This, naturally, lead to the “Black Ghost” nickname. Not simply a local legend, Qualls’ vehicle earned a spot on the National Historic Vehicle Register two years ago and remains in the Qualls family to this day.

For ’23, Dodge has built this tribute using a Challenger SRT Hellcat Redeye Widebody as its base, bumping the output to 807 horsepower and adding some styling addenda calling back to the original car. A unique roof graphic is meant to evoke the old-school ‘gator skin’ vinyl roof which was part and parcel of that ’70 model, along with white graphics on the rear fenders and bright D O D G E billboard lettering on its nose. This author is not sure how he feels about the latter, despite generally liking the detail (see: the old Ford Flex), though that could be down to nearly 15 years of seeing this fascia without such adornment.

Other garnishes on this special edition include the typical tat of special badges inside and out, a smattering of Alcantara around the interior, and hood pins that sprout from the bonnet like dandelions. Keeping with the Black Ghost theme, its Brembo-branded brake calipers are dipped in ink and the 20-inch satin carbon warp speed wheels would be impossible to find in a darkened room.

Like the other Last Call cars, the Black Ghost homage is limited to 300 copies and will have its allocation listed on the Dodge website. One more Last Call is slated for the SEMA Show in November; we’re hoping someone stuffed a Hellephant crate engine into the LX chassis.