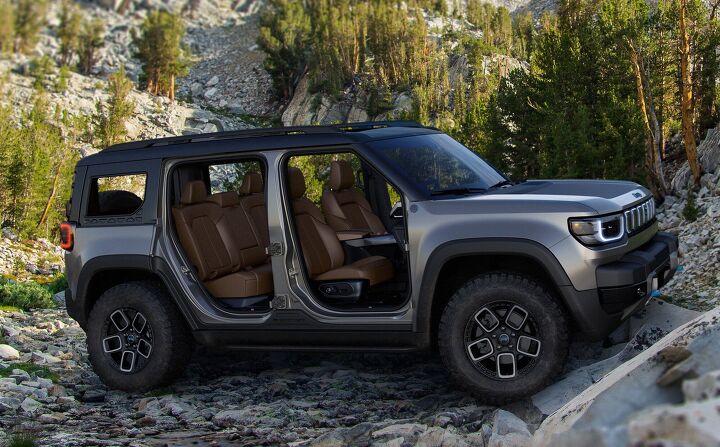 Preparing for a future in which there are a lot more batteries than spark plugs, Jeep has whipped the covers off a trio of electrified vehicles bound for the American market – and at least two of the all-electrics will be stateside in 2024.

Of greatest interest to this off-road gearhead is the new Jeep Recon. If its visage reminds you of the Wrangler, then job done. While it has been designed from the ground up as an EV and isn’t an existing model with electric motors shoved up its seven-slot nose, the similarities between this Recon and the venerable Wrangler are purely intentional.

Details were scant about power and battery size, though Jeep was willing to say it will have “true trail-rated capability” thanks to a Jeep Selec-Terrain traction management system plus e-locker axle technology and under-body protection. Aggressive off-road tires won’t help driving range but will provide the type of dirt grip for which this segment is known. Hewing to the Jeep Lifestyle (TM), Recon has a power-operated top and its doors can be removed. A top-down photo shows a pair of rocker switches surrounded by red paint – the same flourish given to the current Wrangler’s switch for engaging lockers. HMMMM. In addition to our country, the Jeep Recon will be sold in major markets around the world, including Europe.

It’s always fun to read between the lines, so let’s do exactly that. While speaking about the other EV in its quiver, an all-electric Wagoneer, Jeep boss Christian Meunier divulged that both the Recon and Wagoneer EV use the STLA Large platform as their underpinnings, sharing the likes of batteries and some other gubbins but with a different ‘top hat’ and suspension. Here’s where logical deductions come into play: Jeep did openly say the Wagoneer EV is targeted to have 600 horsepower and a driving range of 400 miles. If even a percentage of those numbers translate to the Recon, it should be a hoot to drive – especially since Jim Morrison, head of Jeep brand North America, alluded to the fact that Recon should have similar off-road measurements as a Wrangler. Light it up, then.

Speaking of the Wagoneer EV, technically and mystifyingly called the Wagoneer S for now, that vehicle is said to have “similar legroom” as a Grand Cherokee, suggesting the electric and internal combustion Wagoneer lines could be markedly different in terms of overall footprint. The stats of 600 hp and 400 miles were repeated, as was a 0 – 60 mph run of 3.5 seconds. Its styling is a new take on traditional elements like the seven slot grille, now canted forward into the wind and lined with LED mascara.

Elsewhere, noise was also made about a 4xe variant of the Wagoneer gasser, plus an all-electric Jeep Avenger (above, in yellow) which is only bound for Europe since its size – described as smaller than a Renegade – apparently is unwanted on this side of the pond. Very good, then. A couple of other EVs are slated to appear by 2025. American customers can make reservations for the Recon and electric Wagoneer early in the 2023 calendar year.