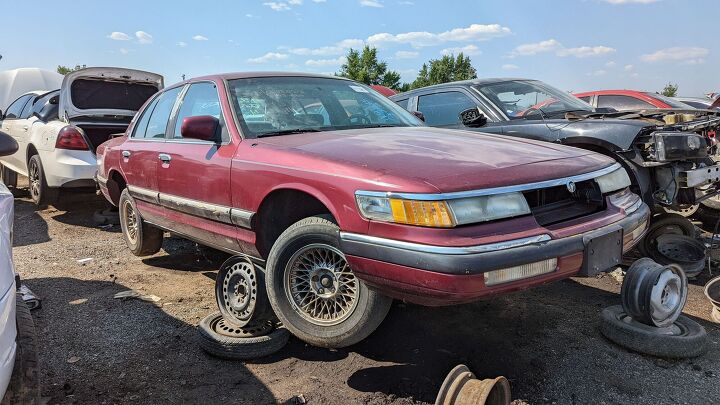 Ford introduced a newly rounded Crown Victoria on the late-1970s-vintage Panther platform for the 1992 model year, and the Mercury Division was right there—as it so often was, from the very beginning in 1939—with a Mercurized version. The 1992-1997 Grand Marquis has become a rarity in the big self-service car graveyards I frequent, so I decided that this worn-out ’93 deserved to be documented for this series.

The Grand Marquis name began life in the 1974 model year, as an interior trim package on the Marquis Brougham, itself based on the Ford LTD. For 1975 through 1978, the still-LTD-based Grand Marquis was a luxurious trim level for the marquis Marquis, and then the first true Grand Marquis debuted for 1979 and stayed in production through 1991.

Of course, the 1992-2011 Grand Marquis will always be known as the “Grandma Keith” to many of us, thanks to a hilarious speech-to-text glitch. This one is an upscale LS, but don’t get too excited about that—there were just the GS and LS trim levels for 1993, and they weren’t much different. The LS got power seats and some nicer cloth inside, and that was about it.

Nobody knew it at the time, but the then-newish Modular 4.6 engine would turn out to be one of Ford’s most reliable engines of the era. This one was rated at either 190 or 210 horsepower, depending on whether the car had the optional dual exhaust (which appears to have been buried in a many-item option package).

This car appears to have backed into a pole at a pretty good clip, or perhaps it spun out first.

The driver’s-side front window was plastered with “Move This Car Or Else” red tags from Greeley, Colorado (about 30 miles to the north of this yard). Eventually, the tow trucks arrived.

This sticker is a bit redundant on a Grandma Keith.

This car appears to have the $543 “Electronic Group” option package ($1,130 in 2022 bucks), which included a digital instrument cluster and automatic HVAC temperature control.

All 1993 Crown Victorias and Grand Marquis came with air conditioning as standard equipment. A decade earlier, such would not have been the case.

The Securicode combination-lock feature goes way back for Ford products, all the way to the early 1980s.

The original owner’s manual was with it to the very end.

As you’d expect, advertising for the Grandma Keith emphasized a long list of standard features. In hindsight, we can say that these were pretty good cars for the money.

This commercial for the ’97 Grandma isn’t the usual thing.