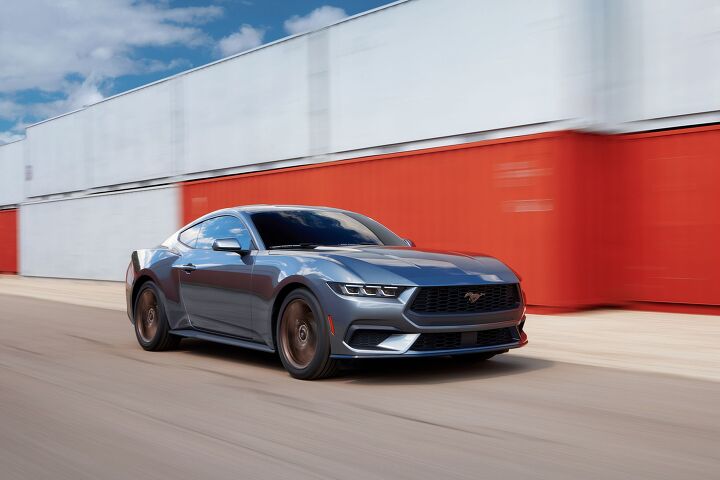 DETROIT — The 2024 Ford Mustang arrives early next summer, but Ford isn’t waiting for next year to take the wraps off.

In an attempt to own the 2022 North American International Auto Show/Detroit Auto Show news cycle, Ford has set up a “stampede” of Mustang owners who are traveling here to the Motor City. That’s ahead of a prime-time unveiling in downtown Detroit.

I should point out, for the sake of context, that as important as the reveal of any new Mustang is, it is not hard for Ford to own the news this year, since there isn’t much else going on. Unless hot-rod Tahoes and special-edition Jeeps tickle your fancy.

(Full disclosure: Ford covered my lodging costs and fed me – and one of those dinners happened to be at the Detroit Tigers game – and allowed me to see the new Mustang up close and personal more than 24 hours before the public could. No airfare, as Detroit is within driving distance of my Chicago home base.)

Ford didn’t change the Mustang’s long hood, short deck swoopy coupe shape but it did give the car new duds. The changes are more on the evolution than the revolution end of the scale – you’ll instantly mark the new car as a Mustang, and you’ll also note that it’s different than the current car thanks to features like new taillights.

It’s an edgier, angular design. Ford claims the roof now allows for easy entry when wearing a helmet during track days. The grille is meant to evoke the first-gen car, and the LED headlights use a tri-bar design that’s recognizably Mustang. The rear overhang is shortened, the rear wheel wells widened, and the rear diffuser re-done. That last is meant to improve aerodynamics.

You have two model choices, based on engine – the 2.3-liter EcoBoost remains, as does the venerable GT, complete with the 5.0-liter Coyote V8. GTs are distinguished by larger, more-aggressive grille openings that increase airflow, new hood vents, and redesigned front splitter.

You can still opt to drop the top – convertibles have one-touch operation and are loosened via a single latch. Ford claims the convertible can handle up to two golf bags.

There are 11 colors to choose from, including a new Vapor Blue color that changes shades under certain lighting and Yellow Splash. You can, of course, add stripes. You can also choose among black, yellow, or Grabber Blue paint jobs for your Brembo brake calipers. Wheels are 17 inches on base cars, and 19 on GTs, with 20s available.

A Bronze Series Design Package is available, and it adds Sinister Bronze alloy wheels and bronze badges. You can get it on either version of the Mustang – including if you also opt for the Performance Pack.

Inside, it’s screen city. Base cars have two separate digital screens that use the Unreal Engine 3D tool from video games for instruments and center-stack infotainment, while upper trims get two screens that are integrated together. Gauges and information in the infotainment screen are customizable, with gauges being set up for situations such as normal driving or track driving, or with a “calm” screen that simplifies information. There’s even a setting that brings up gauges that look like those from the old Fox Bodies of the ‘80s – including the green glow at night.

HVAC controls are now screen-based, but a volume knob remains. The steering wheel is now flat-bottomed, thicker, and has fewer control buttons.

Ford was mum on specs, but there is big news for the V8 – it gets a dual-induction air-intake setup. That’s right: Dual throttle bodies and dual air intakes. The six-speed manual transmission remains, as does the available 10-speed automatic. The EcoBoost still uses a 2.3-liter turbocharged four-cylinder. Ford also claims the car will offer more downforce.

Six drive modes are available: Normal, Sport, Track, Slippery, Drag, and a customizable mode. An optional Performance Pack adds a front tower brace, Torsen limited-slip differential, optional MagneRide active suspension, wider wheels and tires, and larger Brembos – sized at 390 MM up front and 355 in the rear. GTs with this pack get brake ducts and an auxiliary engine-oil cooler. Recaros and an active exhaust are optional with this package.

Ford has increased the steering ratio, and GTs with a stick have standard rev-matching.

If drifting is your thing, an available Performance Electronic Parking Brake allows you to drift your ‘Stang, with settings that help the novice drifter learn and the experts compete. You can also rev a running engine via the key fob. Yes, I see you rolling your eyes, you in the back.

It also gets unique chassis tuning, larger rear sway bars, and heavy-duty front shocks. There will be a strut-tower brace and a K-brace, 19-inch Brembo front brakes with 13.9-inch rotors, a Torsen limited-slip, and Pirelli P Zero tires with width staggered front to rear. The tires are 19 inches.

MagneRide shocks are standard, and the available Handling Package adds a rear wing with a Gurney flap. The car also gets even larger sway bars front and rear, stiffer springs, and Pirelli Trofeo tires. Carbon-fiber wheels are available.

The styling has a more “sinister” look and the cabin gets upgrades appropriate for the car.

We were also told that the GT would have 480+ horsepower.

MORE UPDATES: I have confirmed via Ford PR that the EcoBoost will make around 300 horsepower and be automatic only. Some pics from Ford and the event will be posted below.

Here’s my quick take on the Mustang, with the obvious caveat that I have yet to drive it.

The drift-assist parking brake sounds corny and cheesy, but I can see it leading to endless fun. I like the customizable screens, they looked good in the mockups we saw. Not to mention that Ford is after my own heart – I once owned a Fox body and seeing those gauges mocked up took me back. The new gauges aren’t dead-on accurate – only the speedo and tach truly look like what the Fox had – but the green glow was cool and it was thoughtful of Ford to include this touch. Perhaps other old Mustang gauges can also be mocked-up digitally?

I also suspect the dual-induction system is going to bring more power to the V8 and make the car sound wicked. I’m glad Ford kept the volume knob and a few other key buttons.

I don’t get why the base car screens can’t be fused together like on the upper trims. And while the two screens on the upper trims are technically integrated into each other, they aren’t that well integrated into the dash. I also worry that Ford is trying too hard to chase Millennials and Gen Z when it uses words like “gamification” – never mind that most well-optioned Mustangs, especially GT models, are generally too costly for most younger folks. While pricing hasn’t been announced, the car won’t get cheaper.

Even the existence of the drift stick seems like a too-late nod to the Fast and the Furious franchise.

Finally, the car’s overall look feels, well, too subtle a change. Will people who don’t know a clutch from a compressor know the difference between generations? The good news is that the design is attractive, but then, so is the current car’s styling.

I found myself thinking about Nissan’s “new” Z – that car looks significantly different while rolling on a platform that’s mostly the same as before. Like that car, the Mustang is reskinned while using old bones. In fact, mechanical changes seem subtle. But the newest Z was fun to drive, and improved over the previous car, despite the relative lack of change.

That might be the case here – and in the end, if the car is fun to drive with improved road manners for the daily commute, I think most drivers will be satisfied. After all, the current car, especially in higher-performance guise, is a pretty good track star. If the ride manages to be less punishing (and if convertibles get rid of that dang cowl shake), it could be an even better performance buy than it already is.

That said, Ford’s message to us was that Mustang customers are a “mindset, not a demo.” Looking at the new car, I have no doubt that Ford will keep most current buyers happy and in the fold. Some will balk at the interior, or the edgier lines, but most will find themselves at home in the seventh-gen car. The question is, will Ford bring more buyers in?

That’s if it even needs to – the Camaro is a ghost and the Dodges are going EV. Meanwhile, this Mustang is possibly, perhaps even likely, the last internal-combustion engine Mustang. I asked Ford about electrification plans – hybrid or full EV – and was brushed off politely, as we always are when we inquire about future products. But either way, the Mustang doesn’t have much competition.

Lack of competition can cause complacency. But not always. On paper, the seventh-gen Mustang gives me mixed feelings. I’m not bowled over by the styling, inside or out, but I like screens that look cool and provide lots of info (even though I simultaneously mourn the loss of stylish retro gauges). Perhaps most importantly, I see nothing to suggest the car will be worse to drive than what it replaces.

Looks are one thing. Let’s hope the next ‘Stang continues to have it where it counts.