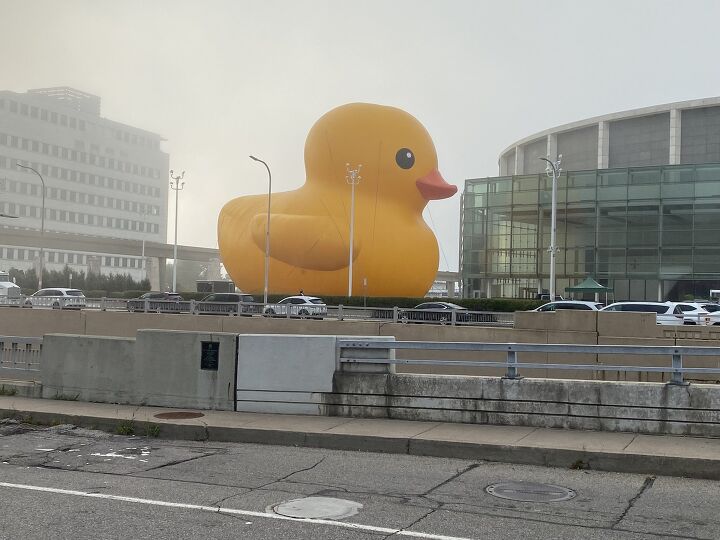 The North American International Auto Show, aka the Detroit Auto Show, can be very weird.

Cattle once ran through the streets. A Jeep once drove through glass. There was the funereal atmosphere of 2009. The legendary booze fests at the old firehouse. The, uh, Train concerts.

This year may have been the weirdest yet. There’s the background of just how effed-up the automotive industry is at the moment (supply chain woes, lingering effects of the Covid pandemic on the business, yada yadda yadda), of course. Add to that mix a large number of no-show brands and the appearance of the president of these United States and the vibe was just, well, odd.

Don’t get me started on the gigantic rubber ducky or the dinosaur replicas dotting the floor.

Yeah, it was that kind of media day.

Whatever one’s political ideology or opinion of Joseph Robinette Biden, or his job as POTUS, one could not deny the buzz that preceded his appearance. I suspect even the die-hard MAGAs among the media*/dealer/engineer/OEM crowd wanted to see him – after all, it’s not every day you can see the sitting president.

(*Contrary to popular belief, not all of us in the media are raging liberals. Yes, it’s true that journalists are more likely to lean left, but in my experience, there are plenty of moderates/anti-Trump righties/MAGAts/libertarians and indifferent apolitical types fighting for free coffee at whichever show stand has the best lattes.).

Conversely, I suspect even the happiest Biden voters were annoyed to have the show effectively shut down for two hours. You usually only hear that kind of grumbling when the open bar becomes a cash bar at the same time that the restaurant runs out of shrimp.

The presence of the president wasn’t the only bit of weirdness. Not by a long shot. Indeed, even after he’d left and the show started to feel more “normal”, I couldn’t help but notice that the Detroit of old was gone – and according to some industry vets, she ain’t coming back. Cue country-song lyrics about pickup-truck taillights.

The rubber duck should’ve clued me in. Walking over from the hotel, I spotted the giant version of toy waterfowl hanging out just down the street from Huntington Place. Following that, I got the lovely experience of a Secret Service patdown – a reminder that POTUS was inbound.

That caused me to miss Jeep taking the wraps off of two minor trim updates. That would normally earn a yawn, but the Jeep presser was, along with Chevy, one of the two “big” ones on the day. Ford’s big unveil of the Mustang is set for tonight.

Still, it’s an auto show. That means there were lattes with Lincoln logos, a cool-looking Ford Bronco, flying cars, and a DeLorean for some reason.

One ink-stained wretch said this year’s show was as sad as 2009, but trust me, it was not. 2009 felt like the death of an industry. 2022’s feeling was one more of happiness and confusion – it’s good to be back in Detroit (and really good to not be freezing to death) but where does NAIAS go from here?

That said, a boatload of brands were missing. Only the Detroit three, Subaru, and Toyota seemed to have show stands (it appears a local dealer represented BMW and perhaps Kia and Volvo). No Nissan/Infiniti, Hyundai/Genesis, Mercedes-Benz, Lexus, and so on – though I saw PR folks from some of the missing brands wandering around.

I don’t think auto shows as a whole are dead – as I’ve said, they’re still worth it for consumers – but the media day might be done. A lot of people think the Internet killed the auto show media day, or perhaps Covid did. Personally, I think the OEMs are killing the show by scheduling unveils ahead of the show. Doesn’t matter if they’re live, remote, or some combination thereof. If OEMs are scheduling debuts on their own, ahead of auto shows, it obviously takes the thunder out of the shows.

I’ve written that before, so I won’t rehash it further. That’s big-picture stuff anyway.

That said, each auto show is part of the bigger picture. And the snapshot from one day in Detroit is, well, a little blurry (and not because of any show-stand champagne – I’m as sober as the Pope as I type this). Next year might be busier, or it might be more dead. It’s really hard to tell.

I have a feeling it will still have ducks and dinos, though.

Yes, I had a pumpkin spice. I am basic.

Who ya gonna…yeah, you know the rest.