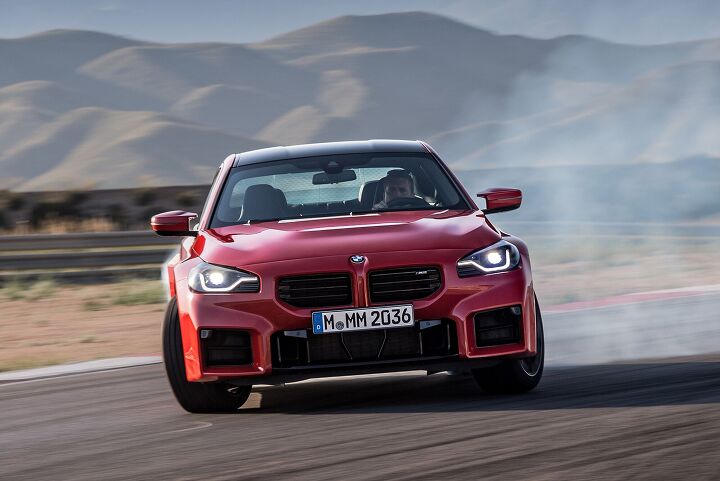 As the industry rockets towards a future eventually denuded of internal combustion, it’s encouraging to know at least some things retain a few traditional enthusiast roots. Witness the new 2023 BMW M2, packing an inline six-cylinder engine and three pedals.

Speaking of the manual, it is a six-speed and BMW expects it to be slower to 60 mph than the eight-speed M Steptronic, estimating times of 4.1 seconds and 3.9 clicks respectively. Still, your author will choose the manual every day of the week and twice on Sunday in a car like this for sheer driving enjoyment and engagement with the machine. Yep, dorky gearhead status confirmed.

Those transmissions are lashed to an S58 TwinPower Turbo, making 453 horsepower and 406 pound-feet of torque. That’s roughly 50 more ponies than the M2 Competition and almost 10 more than the M2 CS. Torque is equal across all three. Given BMW’s model strategy with the last car, it is not unreasonable to suggest there is a near-500 hp M2 in our future. Peak power shows up at higher engine speeds than last year’s whip, with drivers needing to wind things out 1,000 rpm extra (6,250 v 5,230) for all the horses and 300 more (now 2,650). Redline is a shade over seven grand.

Other go-fast features include an Active M rear diff, computer gubbins with a yaffle of traction control settings, and the Adaptive M suspension. Six-piston brakes clamp 15-inch front rotors, two inches more in diameter than the entire wheel on this writer’s first car, with slightly less aggro brakes out back. Snazzy M Carbon buckets seem ripped from the M4, which is fine, while tat such as cognac leather and illuminated badges plus other stuff the B&B does not care about will be available. Typical safety gear like autonomous emergency braking and lane departure warnings are standard across the board. You’ll have noticed the front-end styling changes by now, shown here in Toronto Red.

Become a TTAC insider. Get the latest news, features, TTAC takes, and everything else that gets to The Truth About Cars first by  subscribing to our newsletter.