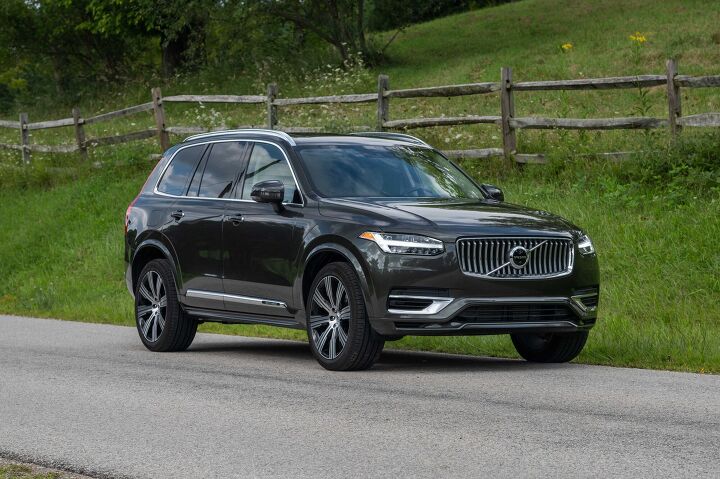 Prices include $1,095 destination charge in the United States – in Canada, Volvo does not quote a separate destination fee, and because of cross-border equipment differences, can’t be directly compared.

Part of becoming a parent is making compromises. Instead of a weekend in Vegas with some friends, you spend your vacation money taking the kids to visit a rat in a Florida swamp. Instead of enjoying a variety of interesting meals each night, it’s chicken fingers with boxed mac and cheese night after night after night.

So it goes in the garage. You may want that sports car, but you compromise and buy an SUV. You may want a full EV, but you don’t want to stop for hours upon hours at some place that doesn’t have chicken fingers and boxed mac and cheese while you take the herd to visit a rat in a Florida swamp.

Until fast-charging infrastructure becomes ubiquitous and reliable, plug-in hybrids are the answer. Having long been a champion of green-friendly causes, Volvo has done an admirable job in bringing hybrid and plug-in options to market over recent years. This latest 2022 Volvo XC90 Recharge doesn’t look all that different on the exterior, but subtle changes throughout transform this family hauler into something that makes compromise look attractive.

Volvo has long been using an opaque numbering scheme for its powertrain options. Numbers like T5, T6, and T8 mean nothing to the average consumer beyond a simple “larger number means more power.” Perhaps that’s a good thing, as it allows for a simple transition between a variety of powertrains and performance options without having to cast new tailgate badges. As before, the T8 trim seen here is the top-performing powertrain.

What’s new, however, is how the T8 makes power. The previous generation used three power adders to the ubiquitous two-liter four-cylinder engine – a turbocharger, a supercharger, and an electric motor. The 400 total system horsepower was plenty adequate – the new powertrain, which eschews the supercharger for a more powerful (143 hp) electric motor, bumps the figures to 455 hp and 523 lb-ft of torque. Notably, this plug-in hybrid package (in this extended range trim) can yield up to 35 miles of all-electric driving range.

Imagine not using a drop of gasoline for your usual daily commute, leaving the tank free for long weekend drives, and, yeah, possibly doing a good thing for the environment. This Volvo, much like the Lorax, speaks for the trees. Except when your idiot author is at the wheel. See, I still haven’t gotten around to running 240v in my garage – after all, the house was built when leaded gasoline was still pretty damned common – and those 523 lb-ft of torque are quite intoxicating. The good folks at C/D clocked the XC90 T8 Recharge at 4.5 seconds 0-60 and a 13.1-second quarter mile. That’s absurd for a massive three-row wagon that can manage an EPA-estimated 26mpg combined – a number that feels conservative, as I was seeing an indicated 28mpg over my test.

Despite the power, the XC90 T8 Recharge (wow, that’s a mouthful) isn’t a sporty SUV. This is fine because sporty SUVs are kinda absurd. Nope, this is a comfortable, soothing ride that can simply get the holeshot onto a jammed freeway onramp when needed. Steering is light without being too numb. With air suspension and massaging front seats, the Volvo does a lovely job of isolating the occupants from the road.

The infotainment system in my tester is showing it’s age – it’s a bit laggy to respond to inputs. The 2023 model, however, promises Volvo’s Google integration, which will likely be more responsive based on my experience in other Volvos in which it’s already been fitted. Sound from the optional ($3,200!) Bowers & Wilkins audio package is superb, aided by the excellent sound deadening within the XC90.

Interior materials are, as always, plush – I really dig the contrast between the pale Nappa leather and the dark grey carpeting – the darker carpets tend to hide crumbs from chicken tenders. And if one chooses, a leather-free wool cloth interior is available – I’ll always applaud the appearance of a cloth interior on a luxury vehicle. Second-row seats are nearly as comfy as the fronts – the third row is best for smaller folk, but if you fits you sits just nicely.

The styling hasn’t changed much over the years – it’s still the same XC90 that blends into urban and suburban scenes without stirring one’s attention. It remains handsome yet anonymous.

The 2022 Volvo XC90 T8 Recharge isn’t for one who wants to shout about anything. It blends into traffic. It whispers while cruising to work silently. It doesn’t loudly proclaim that it’s a premium luxury vehicle, nor does it scream its green bonafides at the neighbors. It simply goes about the work of getting you quite comfortably from here to there without fuss or rancor.