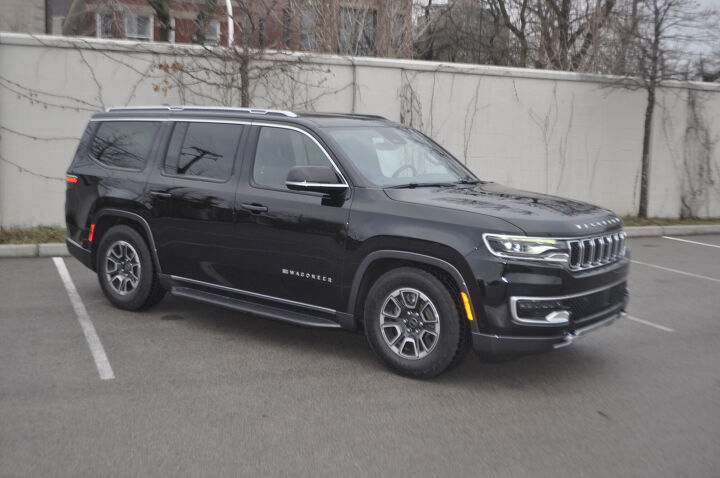 Prices include $2,000 destination charge in the United States and $1,995 to $2,695 for freight, PDI, and A/C tax in Canada and, because of cross-border equipment differences, can’t be directly compared.

The consensus, at least among us shrimp-sucking keyboard warriors who get paid to review cars, is that the Jeep Wagoneer is a bit of a flop, mostly due to an oddly-proportioned exterior design.

Sure, the overfed journo writes between bites of shellfish, the Wagoneer has a nice interior, an excellent available MacIntosh stereo, and an unobjectionable, if unremarkable powertrain. But its looks frighten small dogs.

I’ve gone a bit easier on the Wagoneer and its Grand Wagoneer sibling so far, in part because, while I don’t think this vehicle is a looker, I don’t find it to be quite as ugly, at least not in terms of overall package, as others do. It’s not until I drill down into some details – and think about the various bits of wisdom I’ve heard from talking to actual car designers over the years, that I start to realize that Jeep missed the mark with styling. A relative rarity from a Stellantis brand, at least lately.

While not all Dodge/Chrysler/Jeep/Ram/Alfa products have been attractive over the past decade or so – may I remind you of the Journey? – I’ve also found myself saying, when it comes to certain vehicles under the former FCA/now Stellantis umbrella “well, at least it LOOKS good.”

I may not think the Wagoneer is ugly enough to banish from my neighborhood, but I won’t say it looks good, either.

This is a bummer, since the interior truly is nice, the MacIntosh does indeed rock, and the Jeep’s powertrain is nice and smooth, as to be expected at this price point.

The Wagoneer looks just fine to me from the front. The standard seven-slot grille is familiar and attractive. The hood seems proportioned just right. You start to think the Wagoneer might just be styled as a Grand Cherokee, but longer, and that gives you hope.

Then you make your way aft.

It’s the oddly proportioned – there’s that word again – rear overhang that ruins the look. Or, at least, it does for me. I had a recent conversation with two colleagues about the looks of the full-size, three-row American luxury SUVs and one pointed out that Chevy’s Suburban looks better to his eye due to swoopy styling bits that give the illusion of motion. Fair enough, and while I quibble with many of Chevy’s recent design choices, the Suburban isn’t unattractive.

What irks me about this Jeep land barge is the proportions (I may have to start fining myself $5 per use of the “p” word if I don’t find a thesaurus soon). I can handle slab-sided styling. Boxy may be bland but that doesn’t necessarily make it bad.

But then again – that rear overhang. Woof.

You don’t have to see any of this from the inside, however. And the cabin is pretty nice. Some of the materials disappoint for the price, but the styling looks good, and form mostly follows function – controls are generally easy to use. It’s not perfect – the infotainment screen isn’t well integrated and the two-spoke steering wheel looks a little too old-school – but I generally liked it. Even the rotary-dial shifter is pretty easy to use once you get used to it.

These luxo-barge SUVs are about more than style, of course. Buyers in this class are seeking a silky-smooth V8 with torque and a buttery velvet ride. The Wagoneer generally delivers on the latter – despite Jeep’s propensity for off-road tuning. The Wagoneer is as smooth-riding as anything else in this class.

The Wagoneer comes standard with a 5.7-liter Hemi V8 that has a mild-hybrid setup. The belt/generator has 12 kW of power and 130 lb-ft of launch torque. Total system power is 392 horsepower and 404 lb-ft of torque, and the transmission that gets the power to the wheels is an eight-speed automatic.

Wagoneer ain’t light, and the acceleration reflects that. The Hemi is smooth, sure, and it pulls fairly well, but you won’t be dusting too many folks at the stoplight drag races. You can, with a heavy-enough foot, get enough power for passing and merging, though. Towing capacity is 10,000 pounds.

Handling – well, it exists. And it’s about as good as something this large can be. Which is to say, not great but at least acceptable for suburbia. It’s on par with the last Suburban I drove.

Add in another two grand for destination and you have an $82,820 update on the ‘ole Family Truckster.

This is purely anecdotal, but it seems most of the Wagoneer hate I’ve heard centers around the exterior. That makes sense – the cabin is fine and the driving experience is about what you’d expect from such a beast.

All of this leaves me confused as a car reviewer. My job is to be honest – even if it means being harsh – and to give my opinions, regardless of whether they match the consensus or not. Furthermore, I try to be nuanced and not give in to simplistic takes such as “it sucks!” or “it’s great!” I’m paid to be more thoughtful than that.

And the Wagoneer’s existence taxes me a bit. Style-wise, it’s a swing and a miss. I have eyes, and while styling is subjective, I agree with the overall consensus view, although I am a bit less hard on the rig than most. But the cabin is generally good and the Wagoneer isn’t so offensive from behind the wheel.

It’s easy to hate a vehicle. And there are some vehicles on the market that deserve all the haterade they get. The Wagoneer is a more nuanced case. Jeep’s design team needs to get to work on a styling refresh, stat. But the rest of the package is pretty good.

Problem is, “pretty good” might not be good enough to overcome its styling deficiencies. Or to help Jeep compete with stalwarts like the Suburban.

Jeep hasn’t missed often recently. But they have fallen a bit short here.

The 2022 Jeep Wagoneer is a new three-row large SUV from Jeep.

Jeep fans seeking a large SUV, those who like the ugly duckling.