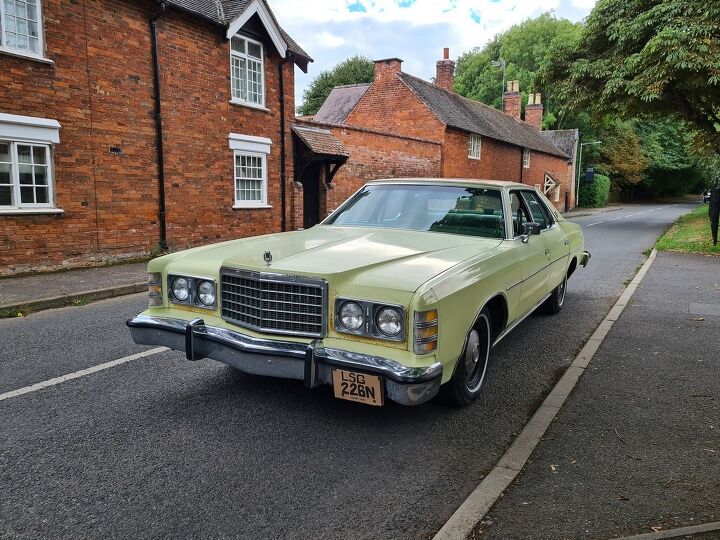 The last time we saw the 1975 Ford was when your author dropped it off at the shipping office in Oakland. Readers can review the previous installments of the trip up through California, the prep of the car, and the purchase and arrangements of the trip elsewhere on this blog by following the links.

What follows may be of academic interest only to the American reader but if there are any fellow British folks there wondering about importing a car from the USA then the following may prove useful. It is also interesting to arrange a sort of race between the vehicle registration organizations of the two countries, to see who made it hardest and who did it quickest!

But first, the car had to make it here to the U.K.

Choosing a shipper is not entirely straightforward. It’s not something that most people do much of so it’s hard to get recommendations, and review sites always seem to be the most polarized of reviews. I took the “three quotes” approach, based on the shipping agents who most British car enthusiasts mention as being the ones they used. One of whom I had used previously myself. The first shipper ruled himself out by being grossly unprofessional in his communication. He was not good to deal with. That left my previous shipper and a second option. Now, these guys don’t own ships, they don’t own the consignment yards even, they are agents. Both were representing the same shipping option and the price was within £20 so I was going to go with my usual guys. Then I got a phone call from the other shipper, Kingstown.

“You’ve stated the car is running and that you want it picked up from San Leandro, but the compound is only at Richmond, you can’t get a truck to do that pick-up for less than $250 because it’s the minimum service fee, but if you can drop it into the office yourself you’ll save $250 and it’s only a quick cab ride back from there”.

I like people who think about things and put the customer’s wallet first. So this is why I dropped the car at the port myself and why I shipped with Kingstown. To be honest, they were really great to work with all throughout the process and I fully recommend them if you want to ship a car trans-Atlantic. I had a few forms to fill out of course – the amount of tax one pays on an imported car varies by a range of criteria. Basically, though a completely standard production car over 40 years old gets about the lowest level of tax/duty there is. So, I had the title to evidence the age and then I filled in a form to declare the value (supported by a Bill of Sale) and the last thing was a declaration that the car had not been modified.

I was very pleased with the service out of Oakland. I have shipped cars from the Port of L.A. before, and this seems to take a lot longer, even before the world’s current logistics and supply chain crunch. The Ford embarked on a ship after only a week in the compound and the sea route from Oakland was direct to the U.K. rather than the L.A. route which seems to usually go via Rotterdam. So, the crossing was shorter than anticipated, and the processing of the car out of the ship and customs area was also very efficient. So now how to get the car from Southampton up to my home halfway up the country?

This is where, again, one should not listen to the opinions of people who never did this. The internet experts whose cousin’s coworker’s dad did it in 1975 and so on. Getting a car from a U.K. port to a U.K. home address is simple: It goes on a truck. There are no “periods of grace” or “special circumstances” or “grey areas”. U.K. road traffic laws are quite clear. I was a little saddened that after managing to register and drive it in the USA that the last leg of its trip home couldn’t be driven. There are a few options. The first is to do it illegally and I really can’t recommend that. The second is that U.K. registered auto traders can use their “Trade Plates” and drive an unregistered car that way. A final option could be to have a local friend who could hold the car until the registration was processed etc, but I didn’t know anyone in Southampton with storage for a large American car. In the end, I knew I had to, so I had it trucked up. Kingstown arranged this for me and only some six weeks after our tearful farewells in California, the LTD was on a transport truck outside my house and the neighbor’s curtains were twitching like crazy.

I actually knew the car was close as I’d had a text from a friend “I’m at the East Midlands transport depot, you’ll never guess what I just helped push-load onto a truck….” followed by a photo of the LTD. The push-loading was due to the battery having gone flat. The trucker seemed amazed that I produced a jump pack and had it running in seconds. The car had arrived safe. Even the stuff I had stashed in the car so I’d save bringing it back in my luggage all made it safely.

Now all I had to do was register the car in my own home country. That has to be painless, right? It should be. Really, it should be. But somehow it always isn’t. It’s like the U.K.’s Driver and Vehicle Licence Agency (DVLA) secretly wants to punish people for doing things like importing their own cars from abroad. In theory, it’s simple, and the process is outlined here for completeness.

There is a form, V55/5 “Registering a previously used imported vehicle”. This can be downloaded online. If the car is more than 10 years old then it’s really easy. If the car is more than 40 years old it’s even easier. Thus the 1975 Ford LTD sits nicely in the “easiest” section. It is as easy as to say Make, model, VIN, color, date of manufacture, state the license class (Historic Vehicle in this case) and provide one’s name and address and a copy of one’s driving license as well as the title from the USA. There is a small fee of £55 for this (about $70 US). Because the DVLA still lives in the 1980s the only form of payment they accept is a check or a Post Office Money Order. I’m not even sure that those still exist! I have a checkbook. Literally, the only people I write checks to anymore are the DVLA. This whole process can only be done by mail. The process suits the period of the car, if not a modern lifestyle. I have learned to be patient during this whole process though.

The reader should be aware that the DVLA hates modified cars. For some reason they expect any car or truck from pre-1960 to be a hot rod of some sort so these usually get a special inspection to ensure they haven’t been customized in some way. My Ford was not in this category. I did not get called for inspection.

The DVLA says to allow five to eight weeks for registration of an imported used car. I phoned up after four weeks because often they can tell you the allocated registration number over the phone, and while it’s not 100 percent legal, I can make a temporary registration plate myself and wait for the documents to arrive by mail later. At least the car can be driven then. After two days of attempts to get through the call queue, I spoke to a clerk.

“I’m sorry sir, we have had to reject your application at this time”

“Ah, when you signed the cheque, part of your signature crossed one of the lines printed on the cheque, so we rejected the payment, we are returning all the paperwork to you”

I am firmly convinced that the officials of the DVLA have an office competition to see what the most trivial and aggravating reasons are to reject an application from the general public.

This exchange took place a week before I was going on vacation. I thought “well, at least the paperwork will be back before my vacation so I can post it back to them before I go away”. But I should know better, the DVLA and the Post Office between them are my joint nemesis and they did not return the paperwork until I was out of the house.

Suddenly the Arizona DOT doesn’t seem such an unreasonable bunch of people to deal with.

Upon return from vacation, the package was there for me, so I wrote a new check and posted everything back to them. Within two weeks I called them again on the phone and experienced the same frustration. Their favorite trick is to let you spend 20 minutes on hold before dropping the call, then when you redial you are told that the queue is full and to try again later. If Kafka lived today, maybe The Trial would be set on the phone to a vehicle registration agency. But the cheerful fellow who answered had good news. A registration! So, I wrote it neatly out on two pieces of 12×6 cardboard which had formerly comprised the front and back of an Amazon box and I set out, practically legally, on my maiden voyage in the U.K. in the big Ford.

I was elated. The reader may imagine, the culmination of a full year of plotting and scheming and a fairly ridiculous level of expense, and I am driving a slightly shabby 1975 Ford LTD on British roads. The Ford drove well to help me celebrate. Yes, it still idles oddly but other than that it goes like a dream and rides like a magic carpet over the imperfect country roads in my area. I still have work to do. The car needs a tidy up cosmetically. Also, despite being exempt from any form of inspection (“MOT”) here due to its age, it makes good sense to convert the headlights to an RHD beam pattern and sundry other little tweaks. I shall convert the turn signals to amber, and this is a project I am still considering the best way to do so.

Some may question “was it worth all the aggravation and expense?” and the answer is unequivocally “yes”.

I’m already planning to do it again, and go coast to coast next time!