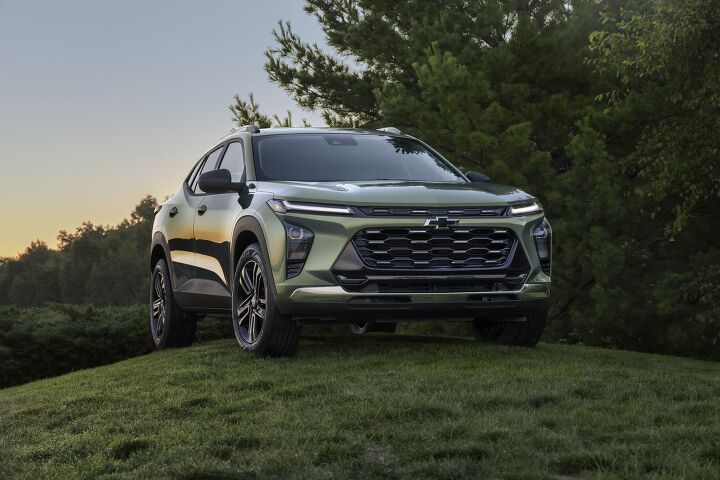 Now that the Spark hatchback has shuffled off this mortal coil, the Trax serves as Chevy’s lowest-priced vehicle. For 2024, the bowtie brand is giving it an overhaul by binning its awkward appearance and overhauling the drivetrain. Will better looks and lower price but less power and half the driven wheels prove a winning formula?

One engine is on tap, showing up in the form of a 1.2-liter turbocharged three-banger making 137 horsepower and 162 lb-ft of torque. This is the same engine that is the base mill in the slightly larger Trailblazer. The sole transmission choice in Trax is a six-speed automatic. For those keeping track at home, the old Trax utilized a 1.4-liter turbo unit good for 155 hp and 177 lb-ft, also funneled through a six-speed slushbox. All-wheel drive has been given the heave-ho, leaving the Trax a front-driver only.

Gone is the slightly dorky old styling, which had too-large headlamps and a truncated but tall design, replaced by a face that seeks to share the limelight with its Blazer cousin. More sheet metal sculpting creates a few interesting creases along its flanks; hey, at least it isn’t plastic cladding from the ‘90s. The new appearance isn’t all sleight-of-hand, with the new Trax measuring a six-inch longer wheelbase and wider track. These changes pull double duty in providing more interior room while also making the car look more planted on the road instead of appearing as if it is perpetually on stilts. Overall, the Trax is 11 inches longer and 2 inches wider than last year.

The interior is light years better than prior models, taking much of its style and layout from other crossovers in the GM lineup which wear far higher price tags. It shows up for duty with an 11-inch-diagonal infotainment color touchscreen and an 8-inch-diagonal driver information center as standard in LT/2RS/Activ trims, though LS and 1RS examples make do with an infotainment screen that is three inches smaller. GM is on the ball with wireless Apple CarPlay and Android Auto, features that show up on this entry-level Trax. There are ample USB ports in which to charge a device, though the three top trims can also get a wireless charging spot.

It doesn’t appear the so-called ‘Activ’ trim gets any more active in terms of ground clearance or gear save for a set of faux skid plates and appropriately grungy paint options. That’s the one shown at the top of this post, by the way.