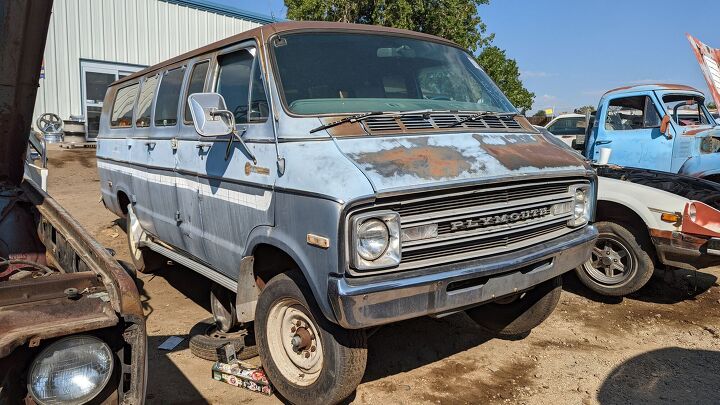 Plymouth sold trucks through 1942, gave up on the idea, then returned to the truck business with the Trail Duster (rebadged Dodge Ramcharger) and Voyager (rebadged Dodge Sportsman) for 1974. Sales of the big Voyager van continued through the 1983 model year, after which the name went onto the new K-platform-derived Plymouth minivan. Here’s one of those all-but-forgotten first-generation Voyagers, found in a Denver self-service yard recently.

I’d found one discarded Sportsman-sibling Voyager ( a propane-fueled ’74 with two-tone paint in California) before, but today’s Junkyard Find is a more interesting discovery.

It’s a beefy one-ton Chrysler B-Series van with the long wheelbase and extended body, with the complete late-1970s conversion-van treatment.

Someone had pried off the badges for the company that did the conversion, but we can assume it was one of the many outfits that did such work in Indiana or Utah.

It appears to have been sold new at a now-defunct Chrysler-Plymouth dealership in McPherson, Kansas, just outside Wichita and 470 miles east of its final parking spot.

The paint has been mostly burned off by 45 years of High Plains sun, but it was once a mix of Wedgewood Blue and Regatta Blue.

Inside, it’s still quite nice. Unlike most conversion vans and RVs I find in car graveyards, it’s not a terrifying bodily-fluids-spattered murder scene and/or Superfund site. Note the shag-carpeted ceiling.

The driver could control the lighting, entertainment system, and major appliances from this panel.

The four front seats are these luxurious swivel chairs with armrests.

They appear to be Chrysler-made.

You need music on 8-track, of course!

The real conversion-van players in 1977 had TV on the road, and so there’s this slick little Sony behind the driver’s head. Was it color or black-and-white?

It wasn’t a full-fledged camper, but long road trips would have been pleasant in here.

The engine lived under a doghouse behind the front axle, so you could call this a mid-engined van.

The engine is some member of the LA small-block V8 family. A 318 (5.2-liter) with 150 horsepower was standard equipment, but that poor engine would have been stressed to death in a hurry trying to haul this van’s 5,000 or more pounds. I think this is the 170-horse optional 360 (5.9-liter), which had a pretty good 280 lb-ft of torque in 1977. It could also be the seventh engine swapped into this van during its life.

How many miles? With the five-digit odometer, it could be 53,863 or 953,863. The unworn interior suggests that this really could be the true mileage.

Yes, I bought the Voice Warning box (with its tiny phonograph player) out of the 280ZX next to this van.

Why buy the Voyager instead of a Sportsman? Because it’s a Plymouth.

This dealer-promo film for the Sportsman explains some of the features you’d find in the near-identical Voyager.