How Long Does the GMC Hummer EV Really Take to Charge? 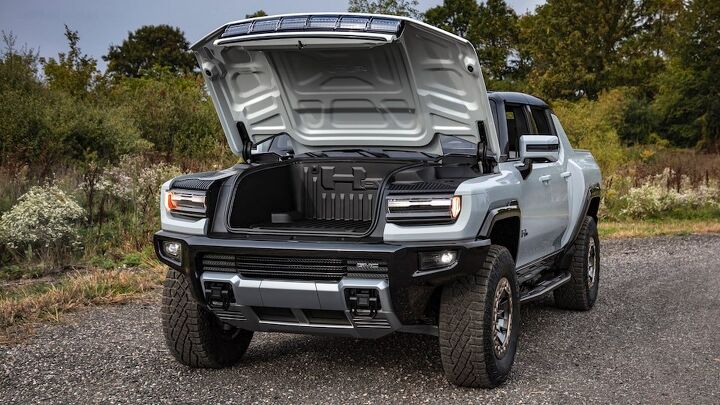 The 9,000-pound behemoth that is the GMC Hummer EV dominated the news cycle this week after some light testing showed that it would take an owner four days to recharge using the most basic at-home setup.

The resulting freakout has split the media landscape and left electrification acolytes bickering with combustion-minded infidels in the automotive crusades. But the real tragedy seems to be the total abandonment of nuance when discussing the matter, as there’s a lot more at play than the new Hummer taking the better part of a week to fully charge. Neither side seems to see the whole picture and has elected to ignore some of the perks and failures associated with charging an all-electric vehicle.

Innocently enough, this all began with a seemingly obvious at-home test conducted by The Fast Lane (TFL) to determine how quickly the Hummer could take on energy. But the resulting video clip was immediately spun up to rebuff or confirm people’s preconceived notions about all-electric vehicles. Breitbart shared the story and framed it as proof of the many perils confronting EV adopters, piggybacking off an earlier video shared by Hoovie’s Garage that showcased the substantial amount of range the Ford Lightning had to sacrifice to tow a loaded trailer weighing a claimed 3,500 pounds.

Both of these tests offered useful information that might be helpful to consumers. However, Breitbart tended to focus on the drawbacks of electrification, encouraging pro-EV outlets (which likewise have an obvious bias) to take the counter position. Though they were swiftly outnumbered by the broader press realizing that focusing on the four-day charging test made for juicier headlines, something that would have been fine if the broader context was provided.

This continued, rolling in more publications, with even Alex Jones chiming in on the matter despite it being obvious he hadn’t watched either video before giving his assessment.

It was a generally disappointing situation, and not because I have an affinity for electric cars. To me, EVs have always felt like they were designed for trendy people that lead an exceptionally structured lifestyle and don’t have a lot of places to go. The torque-prone nature of the powertrain is appealing, but the rest of the EV ownership experience is not. With the notable exception of the Ioniq 5, none of them have really managed to hold my attention for any length of time.

But it’s still important that people are given all the facts, whether or not I’d park one in my own driveway if money were no object.

That’s the full disclosure on where I line up with electrified vehicles. But let’s get one very important item out of the way before we dive into the relevant data and technical jazz. The Hummer is an intentionally ridiculous luxury vehicle harkening back to the gas-guzzling H2 and mimics its energy consumption where electricity is concerned. It starts at $110,295 and weighs so much that there will occasionally be roads and bridges with signs prohibiting its access. If it burned gasoline, it would have a 60-gallon tank and environmentalists would give speeches about how people shouldn’t be allowed to own one.

GMC cannot claim to have built this vehicle because it’s good for the planet, nor has it. So it seems a little unfair to chide it on those grounds – even if the parent company (General Motors) often discusses electrification as if it’s a moral good and an essential part of safeguarding the environment. But the Hummer’s status as an over-the-top, six-figure car also means it’s loaded up with some of the most cutting-edge tech any U.S.-based legacy manufacturer has dared throw into a modern automobile. It stupid fast for how heavy it is, seems like it’ll actually be good off road, and it’s loaded with more bells and whistles than you’ll ever need.

Depending on the capabilities of the charger you’re using, the Hummer can take on loads that overshadow just about everything else that’s currently on the market. This is both impressive and essential for a vehicle that has a hulking 2,923-pound battery to drag around. Due to the ludicrous weight of the Hummer EV, GMC basically had to slap in the largest Ultium pack it could assemble to ensure the vehicle could maintain a desirable range. The battery pack’s 212 kWh of “usable capacity” is supposed to be capable of 329 miles between charges. Testing has shown that it’s actually possible to surpass the EPA-estimated range under ideal conditions – which entail modest and consistent speeds hovering around 70 mph on an exceptionally temperate day.

Shortcomings remain, however. All that added weight makes the Hummer one of the least-efficient EVs you’re likely to come across, meaning the SUV (or pickup, if you prefer) needs to spend more time plugged into electrical outlets. That four-day charging routine is indeed real but only comes up when you’re trying to recoup energy from the most basic 120-volt (Level 1) outlet.

Customers who splurged on an extravagant vehicle like the Hummer EV will presumably have also spent a little more to have upgraded home-charging capabilities of 240 volts (Level 2). This allows drivers to bring a nearly dead battery back to full charge in less than half the time – with early testing suggesting a 24-hour average.

While not blisteringly fast, it’s to be expected from a 212 kWh battery pack and can be further mitigated by taking advantage of 800-volt DC fast charging (something most EVs still lack). Of course, this requires that the battery be preconditioned before charging for optimal results and you have to have one of these stations situated near your route for it to be of any genuine value. But it’s theoretically possible to snag nearly 100 miles of range in the time it takes you to hit the bathroom, check your phone, and enjoy a snack.

In an earlier video, TFL tested the Hummer using DC fast charging and saw the vehicle recoup 73 miles of range in about 10 minutes. Granted, that’s absolutely pathetic compared to filling up a gasoline-powered automobile. But it shows that EV technology is heading in a more useable direction – assuming you can afford to buy the latest hardware and live in an area where 800-volt DC fast charging is widely available and well maintained. But things start to change the longer you leave the car plugged in. Like most electronic devices with a fast-charging option, the Hummer begins taking energy on more slowly as its state of charge increases. TFL noted that the vehicle’s ability to take on energy was more than halved when the battery reached 50 percent and speculated that it could be due to programming from GMC, limitations with the charging station, or the possibility that there was an overabundance of resistance heat being created by sustained fast charging.

I think the above highlights both how little the average person understands about EV charging, while also underpinning shortcomings to electrification that some people (myself included) have been harping on for ages.

But there are other issues to consider. While new EVs can accept energy at a higher rate than their predecessors – resulting in shorter recharge times – continued use of fast charging is also going to shorten the overall lifespan of the battery. The real challenge is determining by how much. Despite advancements in charging tech, exchanging electrons as quickly as possible has some drawbacks. High-load chargers often have to incorporate additional cooling features to ensure they don’t burn themselves out. The same is true for your electric vehicle, though we’re unaware of any long-term EV testing where identical batteries were tested to see how fast vs slow charging affected their condition.

Listen, I dislike the blind push for electrification as much as the next shrewdly paranoid person. But the overheated rhetoric coming from both sides of the fence needs to take a back seat so that more thorough analysis can take place. While absolutely worth mentioning, the Hummer’s four-day charging period is meaningless if the owner has a second vehicle or can afford to upgrade their home-charging solution and is hardly representative of the overall Hummer experience.

Editor’s Note: TFL Car also got stuck in traffic when the Hummer died unexpectedly and inexplicably. The entire video can be viewed here.