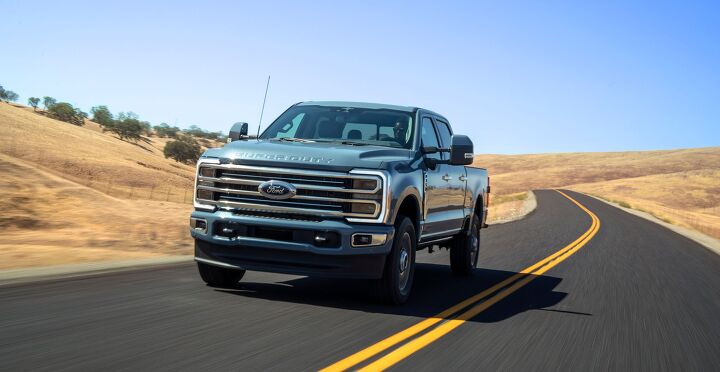 Since roughly the dawn of time (or at least the dawn of manufacturing in Detroit), pickup truck makers have enjoyed beating each other over the head in a perpetual game of one-upmanship. Torque, towing, interior appointments – it’s rare for any stone to be left unturned when one brand decides to move the goalposts.

After the Bowtie Brigade showed off a refreshed Silverado HD last night in Michigan, you just knew the Blue Oval Brutes would clap back in short order with a new take on their Super Duty workhorse. Ed. note: Arguably, Chevy crashed Ford’s party. Though this story was assigned to Mr. Guy, yours truly saw an embargoed briefing held by Ford the day after the Detroit Auto Show. So perhaps Chevrolet caught wind and decided to be an interloper.

First up: a note on styling. It has long been predicted the face of Ford trucks would eventually just become one big ‘equals’ sign, and it appears that day has arrived. Signature LED mascara intended to look like an industrial C-clamp comprises most of the headlamps which bookend one of seven different grille styles – most of which look like that function from math class. Those side vents ahead of the doors are actually functional, by the way, drawing a smidgen of heat from the engine compartment and reducing under-hood air pressure for improved aerodynamics.

Speaking of the engine bay, there continue to be a trio of engine options on offer: Two V8 gassers and a Power Stroke diesel. However, the entry-level octopot is now a 6.8-liter unit instead of a 6.2L, one said to target more low-end torque compared to the existing engine. The tremendous 7.3L pushrod V8 remains an option and will likely increase its output from today’s 430hp/475lb-ft thanks to improved air intake and a tune.

As for the diesel, Ford has decided to read from the Book of Ram and offer the same mill in two different outputs. This will be accomplished by fitting one of them with a unique water jacketed turbo, upgraded exhaust manifold, and its own tune in order to target the “best horsepower and torque” in this class of truck. Pistons and compression are apparently the same between these two engines. Infuriatingly, but expectedly, Ford is playing cards close to their chest and not releasing any power numbers today since they surely do not want Ram or GM to one-up them before the truck even hits dealer lots. At present, the 6.7L Power Stroke makes 475 horsepower and 1,050 lb-ft of torque. Expect 500+ and 1,100+ respectively when this thing goes on sale.

Trims will look familiar to anyone who’s driven a Ford lately, ranging from XL to Limited with typical XLT and Lariat in between. King Ranch and Platinum return as well, plus layered packages like STX and FX4. Off-road gearheads should know about an XL Off-Road trim that packs 33-inch tires and a continuation of the popular Tremor trim that has 35-inch all-terrains as standard. Those latter two trims are available on single rear-wheel trucks only.

Truck owners like their luxuries, so Ford has concentrated a decent amount of effort on the interior of this 2023 Super Duty. A 12-inch infotainment screen takes center stage in most trims save for the XL which makes do with an 8-inch screen. A customizable gauge cluster spanning a foot in width is also available, as are items like wireless device charging plus at-work helpers like props for tablets and Max Recline seats. The foreman can enjoy a banging 1,080-watt B&O sound system with 18 speakers in their top-rung truck. Tinfoil hat types will not like the new inclusion of 5G connectivity in these trucks. Too bad.

Ford’s helpful ProPower Onboard, a generator-type system that can power electrical items at the job site or at home, is now available on Super Duty. Likewise, many trailering tools have been lifted from the F-150 such as hitch assists, blind-spot watching, and a 360-degree trailer camera system. Onboard scales will tell owners when they’re about to hit the truck’s payload limit, and the nav system can plot a safe route if it knows the trailer dimensions so drivers don’t end up on YouTube running into a low bridge or unexpected tight turn.

The new Ford F-Series Super Duty will be built at the Kentucky and Ohio plants. It goes on sale in early 2023 with some features and trim series available starting in spring 2023.