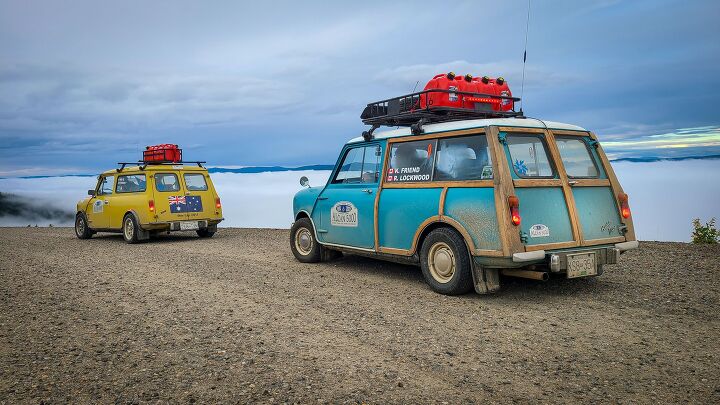 The Alcan 5000 combines long-distance road-tripping with time-speed-distance rally competition. It also means you need to bring the right car for the job. The cars of the Alcan 5000 are as diverse as the people who enter. From sports cars to pickup trucks, modern crossovers to classic Minis, each team chooses a different tool for the job.

This year a total of 43 vehicles started the rally in Kirkland, WA. That included 26 four-wheeled vehicles and 17 adventure motorcycles. All would go as far north as Dawson City, YT, some would dip into Alaska, and everyone finished in Jasper, AB some 5,000 miles later.

Keep in mind, the ‘22 Alcan 5000 was a summer rally. The event switches between summer and winter every two years (like the Olympics). Arguably, drivers have more leeway in vehicle choice during summer versus the winter Alcan 5000’s arctic driving conditions – plus no motos on the winter version. Still, vehicles needed to be ready to tackle a variety of driving conditions: 1,500 miles of dirt roads, potholes the size of caribou, and the need to have enough range to get between fuel stops. The event can be physically and mentally exhausting, too, and having a car that beats you to a pulp won’t help, so comfort isn’t a bad thing to have.

Here are some of the vehicles that participated in this year’s rally. The next Alcan 5000 will be a winter rally and it is scheduled for February 2024.

Two of the most beloved entries at this event were a pair of vintage Minis. Specifically, a 1965 Austin Mini Countryman and a 1973 Australia Leyland Mini Window Van. The blue Countryman belongs to Ken Friend with Ron Lockwood on navigation duty. The yellow Leyland belongs to Rick Higgs. Rick’s co-driver, Mikael Pettersson, came all the way from Sweden to co-drive for the event. Both entrants had participated in the Alcan 5000 before, and both previously campaigned Minis. Fun fact: The light blue ‘65 ran on 10-inch tires while the ‘73 ran on “big” 12-inch rolling stock to fit over the larger brakes. They weren’t the fastest entries, but they oozed character, and both finish successfully.

Jeff Lebesch campaigned a Porsche Macan during the 2020 Alcan 5000. Afterward, he bought a 2020 Porsche 911 Carerra 4. Clearly, the 911 has far less ground clearance than his Macan, and Jeff said he “banged the bottom of the car a few times,” but there was no damage. His Carrera also had a roof rack with custom carbon fiber work to hold extra fuel. Jeff ran the entire Alcan 5000 without a navigator and took 2nd place overall despite not having a co-driver.

Now this isn’t something you see every day. Ethan and Steven Pennell brought this 1988 Audi 5000CD Quattro wagon, but it was far from stock. This beast had a freshly built Audi 20-valve engine putting down an estimated 300+ horsepower to all four wheels. Ethan said it was likely capable of over 500 horses once tuned. The engine was so fresh that its maiden voyage was driving from British Columbia to Washington for the rally’s start. It also featured a roll cage, gravel tires, and a ton of 1980s style.

There were a couple of vehicles that really looked like full-on rally cars. One of them was this 1987 Audi 4000CS Quattro campaigned by the Dialada Rally Team from the Seattle area. This Audi also sounded like a rally car complete extra-loud exhaust note. This all-women team was composed of Erin and Francis Chovanak – who were 23 and 18 years old, making them the youngest Alcan 5000 team in the rally’s history.

Lance and Dave DesBaillets entered this 1991 Ford F150. Lance had just finished the rig as his “do-everything” truck, then got word he’d be going on the Alcan 5000. That meant the F150 was going rallying! Powered by a 351W V8, this pickup had a just-right stance, 35” Nitto Ridge Grappler tires, and plenty of ground clearance. It looked like it could go straight from the Alcan 5000 to the Baja 500.

In addition to the multitude of cars, there were also multiple adventure motorcycles on the trip. One of the more adventurous adventure bikes was this 2013 BMW R1200GS Adventure with a custom-made sidecar. This ride was campaigned by Johnny Scheff and Jay Scher. After catching rogue sepsis in 2019, Jay lost his arms below the elbow and legs below the knee. This did not, however, stop him from being on this year’s Alcan 5000.

Another entry into the truck class was this Toyota Tacoma, which looked more like it was ready for a cross-continent overlanding trip than a road rally. The Texas-based Taco team of Christopher and Afton Dodson entered the truck with an AT Atlas camper, Wrangler Duratrac tires, big driving lights, and plenty of determination.

Hailing from Montana, Bill, Thad, and Trent Biggers showed up to the ‘22 Alcan Rally in the same Dodge Power Wagon they used in the 2020 winter Alcan 5000. With a full camo wrap, flat rear deck with double spare tires, and a big winch bumper, the Biggers were ready for anything. The team finished second in class and 11 out of 35 entries in their big truck.

This 2005 Porsche Cayenne is affectionately known as “The Buggy” at Porsche Centre Calgary where it has been used to shuttle customers (and parts) to and fro. Before the Alcan, this SUV had nearly 100,000 miles on it. It was campaigned by Miles McEwing and Tracey Martin (Miles is actually General Manager at the Porsche Centre). The Porsche was problem-free the entire rally, sans one flat tire. We’re guessing after the Alcan it went back into dealer service, but with a new pedigree.

My wife, Mercedes, and I entered a 2022 Subaru Outback Wilderness. Mechanically stock, it was a great choice for the bad roads in the Canadian north thanks to ample ground clearance, extra suspension travel, and factory all-terrain tires. We added a Rally Innovations lightbar, Lightforce Lights, and some recovery gear just in case. This was an excellent platform for running the Alcan 5000: Powerful, comfortable, and capable with the right mix of interior amenities, performance, and practicality for 5,000 miles of rallying.

[Images courtesy of the author and Mercedes Lilienthal]