Abandoned History: The Life and Times of Edsel, a Ford Alternative by Ford (Part VII) 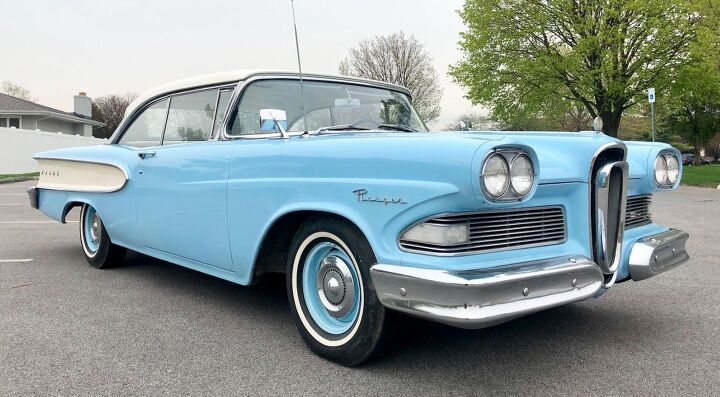 Thus far in our Abandoned History coverage of Edsel, we’ve made our way through four of the company’s seven models, specifically the ones offered in its introductory year of 1958. Pacer and Citation were sedans that received the immediate ax, while the Roundup and Bermuda were wagon cancellations.

Given the company’s poor sales showing, Ford knew it needed to streamline offerings and cut expenses at Edsel. The three models that made it past the company’s initial year were the Ace of Base Ranger, the upper-mid level Corsair, and the middle-market Villager wagon. By eliminating the cheaper and most expensive models in the company’s lineup, Ford also hoped to better differentiate Edsel from the Ford and Mercury cars upon which they were based.

It was an uphill battle for Edsel, and of course, we all know how it ended. But for now, we turn to the cheapest car Edsel ever offered (though it was still sort of expensive). Say hello to Ford’s first-ever use of the Ranger nameplate.

Ranger was the entry-level model in the Edsel line, though it was roughly the same size as everything else the company offered. A full-size car, Ranger was based on the same platform as the Fairlane with which it competed, and was similar to a weird one-year offering from Mercury called Medalist. It was all part of a general reshuffling at the lower end of Ford’s two (then three) main brands circa 1958.

For Ford’s part, their cheapest full-size cars were the Custom and Custom 300. 1957 was the first time Ford added numbers after its model names to denote the more upscale models. Above the Custom was the Fairlane, and the upmarket Fairlane 500. Both models were new for 1957, as the base Fairlane took over for the old Customline, and the Fairlane 500 was the successor to the previous Fairlane.

Fairlane was available with two doors as a hardtop, sedan, and convertible, as well as the Fairlane Skyliner with a retractable roof courtesy of Continental. There was also a two-door Fairlane truck (coupe utility), and a four-door hardtop, sedan, and wagon. A very complete line.

Mercury offered its second generation Monterey as a base offering in 1957, accompanied by the mid-market Montclair. But in 1958 there was a new lesser option, the Medalist. The 1958 Medalist was a revival of a model Mercury previously offered for one year in 1956.

Initially only a two-door sedan, the 1958 Medalist line expanded to include a two-door hardtop, as well as a four-door sedan and hardtop. The Medalist was cheaper than any other Mercury but more expensive than the established and better regarded Fairlane 500. Oddly, its wheelbase was an inch longer than its Ford counterpart, at 119 inches. Like many Edsels, the Medalist existed only for 1958. History has largely forgotten this car, and it’s difficult to find pictures.

The Ranger shared its 118-inch wheelbase with the Fairlane but was available in fewer body styles: Ranger was limited to sedans and hardtops, with two- and four-doors. The Ranger’s overall length was 213.2 inches, with a width of 78.8 inches in 1958. Weight was low and between 3,700 and 4,000 pounds dependent upon equipment. Given its more extensive overhangs, the Ranger did have some length on its Fairlane sibling, which measured 207 inches. But the Edsel was exactly the same length as Mercury’s Medalist.

Unlike other Edsel products that forced a single engine upon the consumer, there were options for the Ranger. Base power came from a 223 cubic inch (3.7L) Mileage Maker inline-six. The next step up was the 292 Ford Y-block V8 (4.8L), while the largest engine on offer was the 361 (5.9L) FE V8.

Off-limits was the larger 410 (6.7L) MEL V8 used in more expensive Edsels like the Corsair and Citation. A manual transmission was standard on Ranger, though the three-speed Cruise-O-Matic was optional. It was shifted on the column as standard, or via the unfortunate Teletouch buttons if a buyer paid quite a bit extra: $231 ($2,392 adj).

And “paid extra” was something the Ranger buyer would need to get used to, as most features were options at Edsel’s entry-level. Armrests, a rearview mirror, coat hangers, and a cigarette lighter were standard. Feet rested on black rubber squares as the floor mats.

Unlike other Edsels, the Ranger’s two-tone paint scheme was an optional extra. The heater was also an optional extra for $92 ($952 adj.), and big spenders could have air conditioning for $417 ($4,318 adj.). Other options included seat belts, warning lights for the dash, rear child safety locks, and remote trunk release.

By now you’re used to the Edsel treatment on the 1958 Fords. The mesh two-tier grille of the Fairlane was swapped for a large central horse collar on the Ranger. It was flanked by two horizontal grilles that wrapped around the front corners, decorated with chromed horizontal slats. Ford reused the Fairlane’s quad headlamps but placed them within ovoid pods that extended out from the fender.

The split bumper treatment was applied like other Edsels, but the Ranger differed from other models in order to show its basic status: It had almost no stainless steel trim at its front end. The only decoration on the side of the Ranger before the C-pillar was its model name in script. Ranger used much less side trim detail than the Fairlane upon which it was based, which was the opposite of other Edsel models.

Toward the rear, designers applied the standard Edsel scalloped detailing to the rear door and fender. Said fender was altered from its Fairlane shape, with a flattened horizontal fin instead of a vertical one. The fin led to a reshaped trunk lid that held a set of spear-shaped tail lamps, instead of the large quad ovals of the Fairlane. Fortunately, the Ranger did not opt for the confusing boomerang lamps of the company’s wagon models.

Ranger’s bumper was largely the same shape as the Fairlane’s but had a slimmer section in the middle that mirrored the thin trunk line. Overall, the Ranger’s lack of exterior detailing and brightwork made it look a bit less jarring than the other Edsel models. Especially so compared to the awkward tailgate treatment on the wagons.

Inside, the Ranger received the same dashboard layout as the other Edsels, but with a majority of features removed. Spared from cost-cutting were the dials, which were the same as in other Edsel models. Ranger even stayed on brand with its drum-style rotating speedometer. However, along the driver-focused dash, there was a lot of blank space, and blacked-out lights to remind a customer they’d bought the cheapest Edsel. Of course, they’d remember that on their own if they didn’t have a heater in the winter.

Perhaps partially down to its lower pricing and less in-your-face styling, the Ranger was the most successful Edsel model of 1958. In our next installment, we’ll cover Ranger’s pricing and sales, as well as the emergency changes Ford made to it for 1959. For its second year, Ranger would find itself bearing half of the discontinued Pacer’s responsibilities.

Become a TTAC insider. Get the latest news, features, TTAC takes, and everything else that gets to The Truth About Cars first by subscribing to our newsletter.