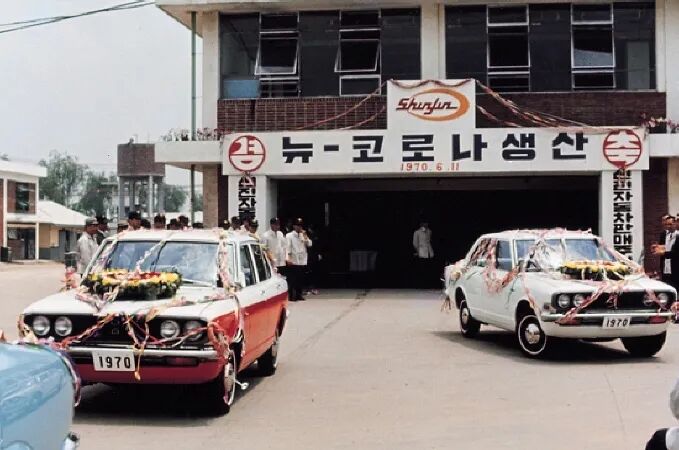 We return to our Abandoned History coverage of Daewoo Motors in the early part of the Sixties. Korea was a newly independent nation still in the process of building its economy after many decades of Japanese occupation. The new Korean government seemingly relied on two tenets in its earliest years: Centralized control and openness to bribes.

Both those factors were at play when the government handed the production of all passenger cars to a single company, Saenara Motors. Via a huge loan and technical assistance from Nissan, Saenara built Korea’s first car, the Saenara (Datsun) Bluebird via knock-down kits assembled in South Korea. But once the government noticed there was too much capital flowing out of the country, they banned Saenara from buying more kits from Japan. The scraps of bankrupt Saenara were picked up by another company, Shinjin.

More correctly, Shinjin Industrial purchased the Nissan-designed Saenara factory from a bank and the Korean government after it won the right to make all automobiles, parts, and components for Korea (via a suitably sized political contribution). The new plan was part of the even more centralized automobile production scheme of 1964, which replaced the initial plan of 1962.

Shinjin had experience in American Jeep repair as it worked under contract for the U.S. military, and built a few hundred Jeep-powered examples of the Saenara Bluebird as the Shinjin Shinsungho. Their small production was not technically authorized by the government and occurred at the time between Saenara’s bankruptcy and Shinjin’s production award. They took control of the Saenara plant in November of 1965.

While it would seem logical to continue with Bluebird production – the factory was built just a few years before for that express purpose – Shinjin decided not to go that route. Instead, they reached out to Nissan competitor Mitsubishi (then called Central Japan Heavy Industries). Given Shinjin’s Jeep experience the company likely found more common ground with Mitsubishi than Nissan. Mitsubishi had licensed production from Willys Jeep in 1951 to build a knock-down version of the Jeep CJ.

With an agreement in place, Shinjin imported knock-down kits of a Mitsubishi passenger car. It’s unclear which model specifically, but the timeline leaves one of two options: Mitsubishi’s first car the 500, or its successor the Colt 600. The new Shinjin was assembled at the Saenara factory using kits provided by Mitsubishi and (more importantly) imported parts.

The company’s first new car didn’t last long. Other Korean parts manufacturers were quick to point out that using kits and imported parts was against the government’s centralized directive for local localization of all things automotive. After around 100 kits were assembled Shinjin caved to the various outside pressures, and canceled their deal with Mitsubishi within a year.

Shinjin needed a new direction to get a suitably local passenger car in production. A deal was signed with Toyota in January of 1966 that would allow Shinjin to assemble the Toyota Corona. It was the third generation Corona, introduced late in 1964 in Japan. Available in seven different body styles (sedan, coupe, van, wagon, hatchback, and two different trucks), the Corona finished its Japanese production in January of 1970.

South Korean Shinjin Corona production started in May of 1966 and did not receive the same opposition from outside companies since it had 21 percent local parts content. The Korean government was satisfied with the new Corona and allowed its production to continue undisturbed. Since Shinjin owned the entire passenger car market, it was soon a thriving company, with 3.2 billion won ($70.9 million USD adj.) in assets by 1968.

However, trouble was brewing with other Korean corporations during that time. Seeing Shinjin’s monopolistic success, other companies formed lobby groups to pressure the government to grant more auto manufacturing licenses. The government resisted initially but caved in 1966 after only a few months of Corona production.

The following year, though all new cars on sale were still Coronas, competition appeared in the marketplace when Hyundai was established in 1967. A year later, Asia Motors was also approved for car manufacture. Asia Motors eventually became a subsidiary of Kia, the third Korean manufacturer approved (1971).

By 1969 there were other Korean-produced cars on sale from the aforementioned competition, and it meant a new watermark for domestic car production: 33,000 cars were assembled in South Korea that year. Shinjin could manage around 7,400 cars in total when it was the sole producer.

Worth noting, that in 1967 Shinjin also picked up rights to the Toyota Publica. The Publica was a subcompact smaller than the Corona and was a replacement for the Starlet. Publica was produced in Japan from 1961 to 1978 and was the smallest car the company offered. Though it was sold in five different body styles (sedan, coupe, wagon, truck, convertible), all had only two doors.

The same year as the smaller Publica, Shinjin’s range also expanded to include the Crown. The first luxury car sold in the Korean market, the larger (Toyopet) Crown was a brand new model that also entered Japanese production in 1967. It was the first time Shinjin had access to a new product. The Crown was sold in four body styles and included a four-door sedan and wagon, and a two-door-coupe and pickup.

But the development of broader car manufacturing caused a new and different problem. Like all industries where sales are limited to a domestic marketplace, the Korean car companies soon reached a ceiling. Only so many people could afford cars, and of that subset, many had a vehicle already with no need for another. Across the sea, suits at Toyota HQ were not happy.

Toyota had an ownership stake in Shinjin as a part of its Corona venture. The company frowned at the limited market ceiling but had a secondary reason they wanted out of the marriage with Shinjin: China. Toyota wanted to sell cars in China, a developing market where it had no product. The ownership in Shinjin meant Chinese sales were not possible, since communist China banned companies that had operations in South Korea or Taiwan from doing any business in China.

When Toyota brought China into the conversation, the Korean government intervened and facilitated a deal with a new company. It was a firm that had plenty of money, lots of cars, and could ensure the continued success of Shinjin. Say hello to General Motors.

The deal was completed in 1972. Toyota sold its Shinjin ownership to GM, which became a 50-50 partner with the Korean firm. GM’s new division was called General Motors Korea, and Shinjin changed its name to General Motors Korea (GMK), too. The change immediately spelled the end of Corona, Publica, and Crown production, but that was fine with all parties involved.

GM had a new place to distribute its product, but it couldn’t exactly foist its huge American wares like the Impala on the Korean marketplace. Instead, the first GMK products began a trend for General Motors that would last for decades. When Detroit didn’t know where to turn to fill a product gap, it turned to Opel. We’ll pick it up there in our next installment.