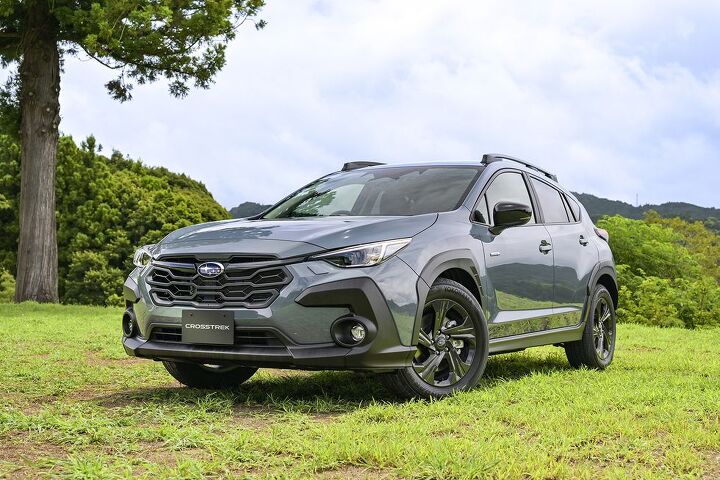 Subaru will launch an updated Crosstrek in the United States next year and showcased the Japanese model on Thursday to whet our appetites.

Though nobody at the company seems overly eager to reinvent a model offering such enviable sales figures. Most of the changes seem to be aesthetic in nature, with the exterior seeing some new creases – resulting in a more complicated and pleasing overall shape. There’s also been an increase in the number of plastic panels used on the vehicle’s exterior. However, this doesn’t look as disagreeable as it sounds.

Subaru has really been leaning hard into the black plastic cladding of late. The company even added some to the WRX in 2021 for reasons I’ll probably never understand. But it makes more sense on the Crosstrek because the kind of people likely to own one aren’t going to be worried about scuffed paint until after there’s been a minor tragedy while parking. I know tons of people that own these cars and all of them gave me the same reasoning – they needed a car, liked the brand, liked the price, and thought the model checked all the necessary boxes.

But none of them could be considered auto enthusiasts, meaning the Crosstrek’s handful of shortcomings doesn’t really matter to them. The base engine leaves the car feeling utterly lethargic on the highway, the interior isn’t particularly impressive, and it’s not quite as comfortable off-road as the relevant marketing materials would have one believe. But it all kind of comes together in this infinitely useful package that won’t break the bank.

Base units start below $24,000 and offer reasonably good fuel economy. But even top-trim Crosstreks with the slicker powertrains don’t retail for much more than $38,000.

The next generation is hoping to update itself in a manner that addresses those shortcomings while leaning into its strengths, as Subaru readies improved driver-assistance features, a larger central touchscreen, comfier seats, and an updated exterior that seems to suggest the updated Crosstrek was actually made for rock crawling. It won’t be. But it’ll still be a better option to take off-road than most other similarly priced compact cars – most of which also won’t offer the kind of cargo capacity as the Crosstrek.

Portrait-oriented screens seem to have become a thing for Subaru, so it’s tossing an 11.6-inch unit into the next-generation crossover and leveraging the latest version of its Starlink interface. This means Apple CarPlay and Android Auto connectivity will be standard. The same looks to be true for the company’s EyeSight driver-assistance package, though we don’t yet know which features will be issued on the U.S. market.

Powertrain options are similarly unknown. However, the odds are good that Subaru will stick with the 152-horsepower, 2.0-liter boxer-fur engine or the more powerful 2.5-liter boxer-four with 182 hp already available on the current generation. We’re also expecting the ability to option a six-speed manual transmission (hopefully on the bigger engine this time) if the CVT isn’t to your liking.

The hybrid (“e-Boxer”) model probably isn’t going anywhere either and it’s the version you’re most likely to see having some work done before the updated car goes on sale in 2023. As things currently stand, the hybrid version takes up to five hours to recharge on a 120-volt outlet (half that if you’re on 240 volts) and allows for a dozen or so all-electric miles before you need to swap back into gasoline mode. We’ve heard rumors that the manufacturer was working on this but haven’t managed to confirm anything just yet.

Expect Subaru to issue a comprehensive list of changes the Crosstrek will be undertaking on our market between now and then. In the interim, management is just happy that you know there’s an updated model on the horizon because it’s planning to sell at least 100,000 units here annually.