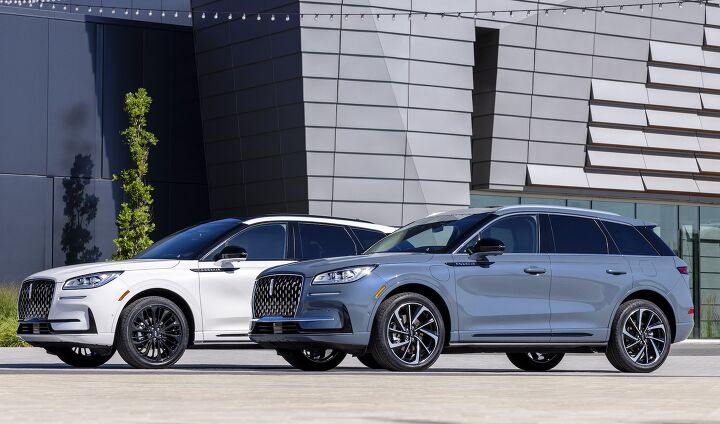 Now they’ve binned everything that is not an SUV, Lincoln is free to spend its allowance as it sees fit on new clothes and tech for its crossover lineup. To be fair, that style of vehicle is the beyond-dominant preference of most shoppers in the Lincoln demographic – and the brand would be ill-advised to walk away from those profits. Doesn’t make us pine any less for a Continental with coach doors.

Corsair – a good, pronounceable which rounds out a lineup that has finally binned the MK-Soup – is Lincoln’s best-selling nameplate, representing the cutthroat luxury crossover segment that’s inhabited by well-established players from Japanese and German brands. For 2023, car spotters will immediately spy the larger grille, one which now dips dramatically towards the pavement yet seems to work pretty well with the vertically arranged drops that look like miniature denuded Lincoln logos. Those DRL wings under the headlamps have also been massaged.

Driver assists are all the rage these days, and the Blue Oval Lincoln seems determined not to miss the boat. Their take on the feature is called ActiveGlide, which may sound like a tool used to aid the insertion of a suppository but is actually a suite of tools to assist with lane changes and it also uses AI to predict the flow of traffic at curves. Specifically, the Lane Change Assist can perform a hands-free lane change when the driver taps the turn signal and suggests a lane change in slow-moving traffic.

Meanwhile, Predictive Speed Assist automatically adjusts the car’s speed as drivers approach a sharp curve, signaling the driver ahead of time when a speed change is about to occur. Toss in lane keeping which is more than just ping-ponging off lane markers and a next-gen Intersection Assist system to help keep drivers from mowing down pedestrians while turning and you have the makings of a decently robust roster of tools – even if it does sound a step behind SuperCruise for now.

The little Lincoln will be available with either a 2.0-liter turbocharged four-cylinder gas engine making 250 horsepower or a 2.5-liter plug-in hybrid in the Grand Touring trim. That model’s internal combustion and electrons tag team to produce a combined 266 ponies. An intelligent all-wheel drive system switches between front- and all-wheel drive, as most of these systems do, depending on road conditions.

Lincoln continues to being the heat with its interior design, introducing a Smoked Truffle colorway along with a zesty Eternal Red. The sooner Ford and its divisions get back to the deep bordello reds and thick ocean blues they used to offer in the ‘80s and ‘90s, the better. I want these options on my next F-150. Lincoln suit Liam Butler, who toils in the brand’s color and materials department, seems to agree. “Color plays a major role,” he said, explaining that “shift the mood of the interior, creating a warm environment and a luxurious experience.” He’s right.

The ‘23 Corsair will be built in Kentucky, with orders being taken immediately. These machines should begin arriving in showrooms early in the 2023 calendar year.