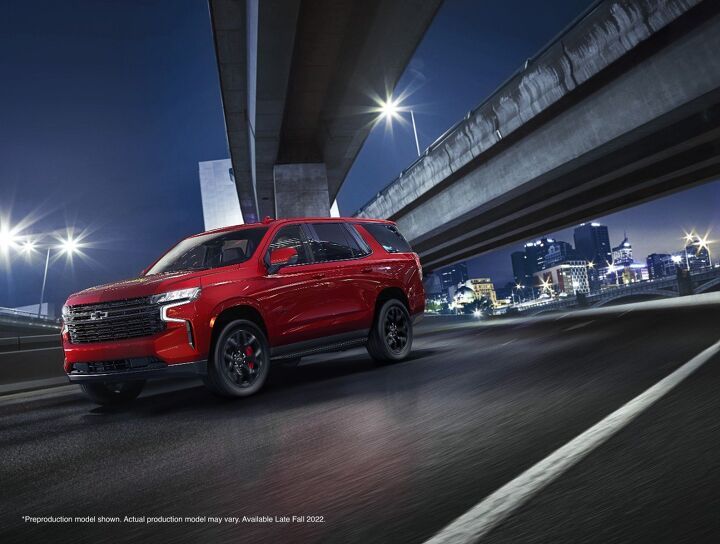 The 2023 Chevrolet Tahoe RST Performance Edition was unveiled at the Detroit Auto Show on Wednesday with an array of mechanical enhancements borrowed from the Tahoe PPV – or Police Pursuit Vehicle.

While American muscle cars originally evolved from moonshiners modifying vehicles to ensure a swift getaway from police enforcing an unpopular law, automakers would actually find themselves utilizing components that had been reserved for law enforcement to make production hot rods even quicker decades later. Police vehicles often came with upgraded engines, brakes, shock absorbers, and even entire handling packages that weren’t available to the general public – at least not until manufacturers realized they could spin that into a profit on the passenger market, too.

The new Chevrolet Tahoe RST Performance Edition runs with this concept by lifting the suspension from the Pursuit package. That means upgraded springs, dampers, sway bars, and some unique tuning with a ride height that’s 0.4-inches lower up front and 0.8-inches lower at the rear. Stopping power has likewise been enhanced by larger Brembo brakes and backed by claims that Chevy also improved pedal responsiveness. This is alleged to give the top-tier RST the power to bring itself to a halt from 60 mph in 133 feet.

“The 2023 Tahoe RST Performance Edition is designed for those who want the best of both worlds – the everyday comfort and capability of a full-size SUV along with the driving excitement of a true performance vehicle,” said Scott Bell, Chevrolet’s vice president. “It leverages the proven capability of Chevy’s pursuit-rated police vehicle packages and motorsports success to offer a confident, engaging driving experience for our customers.”

Though something tells me that most Tahoe RST shoppers aren’t going to be overly concerned with handling upgrades and the possibility of engaging in some late braking. If slinging oneself around a corner at the highest speed possible were a primary concern, GM fans would be probably looking at the Camaro. Hi-po Tahoe customers aren’t seeking a pony car suited for track days, they want a cargo-friendly rhinoceros that can charge down rivals on the highway or tow 7,600 pounds without breaking a sweat.

To that effect, Chevy has outfitted the model with a 6.2-liter V8 outputting 433 horsepower and 467 pound-feet of torque through its 10-speed automatic transmission. This represents an increase of 13 horsepower and 7 lb-ft over the standard RST and would likely be a tad more impressive on a much-lighter vehicle. Depending on whether you option all-wheel drive, the performance Tahoe can weigh anywhere between 5,356 and 5,553 pounds.

While quick, this doesn’t make the model blisteringly fast. Chevy has the Performance Edition hitting 60 mph in 5.78 seconds. That’s roughly the same as the Mazda MX-5, though the freer-flowing exhaust system that’s helping the RST shave off those fractions of a second will probably help it sound more menacing. The top speed was said to be 124 mph, which also seems a little lackluster until you’ve been told that’s 12 miles an hour more than the standard RST can manage.

How much does all of this cost? Chevy said the Performance Edition will be an $8,525 upgrade for the standard Tahoe RST – with the optional 6.2-liter V8 we’ve been comparing it to in this article. That’ll put you at over $80,000 once the destination is factored in. However, it does come with the Luxury Package that incorporates some of GM’s advanced safety tech and luxo-features like a heated steering wheel and heated second-row seats to make the price a little easier to cope with.

If that sounds too steep for a fancier, better-handling Tahoe, shoppers will still be able to purchase the RST without the police parts and larger engine. Unless Chevrolet decides to nix them before the year is over, customers can likewise snag the base RST equipped with either the 5.3-liter V8 or 3.0-liter Duramax turbo diesel for 10 grand less. The higher-riding Tahoe Z71 will also remain on offer for just about every powertrain you might want (minus the diesel).

However, if nothing but the RST Premium Edition will do, the model is supposed to commence production before the new year.