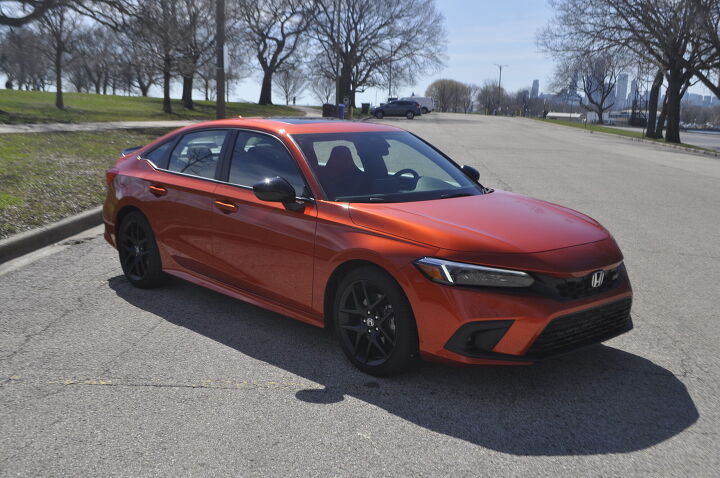 Prices include $1,015 destination charge in the United States and $1,880 for freight, PDI, and A/C tax in Canada and, because of cross-border equipment differences, can’t be directly compared.

One could be forgiven for worrying that when Honda updated the Civic, it would muck things up. Make a good thing worse. Especially when it comes to the enthusiast-oriented Si trim.

The eleventh-generation car debuted last year as a 2022, and the Si version followed soon after. As most of you no doubt know, the Si is the hopped-up performance version of the Civic, though it’s not the highest-performance trim. That would be the Type R, which is currently on hiatus for the moment – the 2023 Honda Civic Type R will bow soon.

Back to the Si. As I said, there were concerns that the next-gen car wouldn’t be as fun as the outgoing model. This isn’t unique to Honda. Automotive history is littered with examples of redesigned models that took a step (or several) backward, so enthusiasts naturally worry that any new model will disappoint.

That’s not the case here. Not only is the newest Civic arguably better-looking than the old car, thanks to a handsome (if slightly bland) blend of curves and straight lines, but the Si has kept the fun-to-drive torch aflame.

The old Civic’s styling, Si or not, was polarizing. A hodgepodge of angles and wedges, with boy-racer touches on the Si and Type R, it never failed to provoke an opinion. Personally, I liked it, but to each his (or her) own.

The new car blends. Even in Si trim. The spoiler is subtle, for one thing. Sure, some things stand out, such as my test car’s Blazing Orange Pearl paint and blacked-out wheels, but overall I felt like I wasn’t sticking out too much in traffic.

Looks are one thing. The Si, and similar cars of its ilk, are all about the driving. I’m pleased to report that the high-strung fun of previous Sis remains, though Honda has made the car feel a bit more civilized when one is just puttering around town.

The previous car was always champing at the bit to play, even in situations in which you would wish for it to settle down. This was true even though one needed to wind the engine to nearly 6K RPM to get peak horsepower. Maybe it’s because peak torque was available at just over 2,000 RPM. Or maybe it was the sport suspension, which clearly traded some ride quality for handling and was on the stiff side.

This new Civic Si still rides a bit rough and still seems ready to play, but the ride is just a touch softer and the car feels just a tad more settled when in stop-and-go or during a sixth-gear freeway cruise.

This means the new Si feels about as quick as the old one, despite being a bit heavier. The shifter for the six-speed manual remains a delight, thanks to short throws and crisp action, though the clutch needs some tweaking in order to offer a more progressive takeup and feel. It’s not quite a light switch, but it does take some getting used to, especially when it comes to smooth launches in traffic.

The stick does come standard with rev-matching for downshifts, so that’s nice. There’s also a limited-slip differential at work. The suspension is a MacPherson strut setup in front and multilink in the rear. Three drive modes are available: Normal, Sport, and customizable Individual.

The car’s ability to turn in remains sharp and the steering retains a decent amount of sporty feel despite a bit of artificiality sneaking its way into the electric power-steering system. The only real flaw I experienced was a surprising amount of body roll – more than I recall the last Si having. It’s no deal-breaker, but it is a bit of a letdown.

The Si has the same updated cabin as other Civics, and aside from the infotainment screen sticking out like Aaron Rodgers at a Big Pharma convention, it’s handsome. The HVAC controls are easy to use, but the audio and infotainment controls involve fussing with the infotainment screen. Honda has tried to make this process easier via clearly delineated buttons and the return of a volume knob for the radio, but there’s still a bit more effort needed than there should be.

I do mourn the loss of heated seats for the U.S. market, as an American Snow Belter. The Canucks among us can still warm their backside, however.

Those smug hosers, eh? What’s that all aboot? Ahem, I digress.

Buyers in either country will appreciate how the Civic has fun responsibly – the fuel-economy numbers are 37 mpg highway and 31 combined and based on what I saw during my loan, I believe most drivers will achieve similar. City dwellers and those with feet of lead won’t do quite as well, but the numbers will likely still be respectable.

That might be the Si’s biggest strength – what it can do for under $30K. The Volkswagen Jetta GLI has an arguably nicer interior and better manners when not being pushed, but it’s slightly more expensive. Subaru’s WRX offers all-wheel drive and moar powah, but it also costs more, and the sticker balloons when you start adding options. The sublime Hyundai Elantra N, the newest entrant in this class, is also pricier. So, too, is Volkswagen’s beloved GTI.

The Civic gives up power and/or some comfort features to its competition, and its relaxed-driving road manners are worse than all but the WRX. But the price is right.

Honda’s Civic has changed, but the Si experience remains the same, for better or for worse. Mostly for the better. And the price tag remains relatively low.

I don’t know if the Civic Si is the best manual-transmission sporty compact four-door. Cases could be made for all of them, with the two VWs and the Hyundai offering perhaps the best all-around packaging. But the Civic Si is almost certainly the best value.

The 2022 Honda Civic Si rides on the newest Civic platform. The venerable Civic is in its eleventh generation and the Si remains as the “mainstream” performance trim for the Civic. The track-focused Civic Type R returns for 2023.

Performance-car enthusiasts on a budget – especially if they need the utility of a four-door sedan.